We all make assumptions in life. We assume that when we flip a light switch that the electricity will work. We assume our taxi driver won’t get in a wreck. We assume that if we throw a ball up in the air, it will come down. These kinds of assumptions are based on experience, playing the odds, and belief in scientific laws.

Pension funds make assumptions too. And in playing the odds, some retirement systems have left themselves little to no room for error.

Arizona’s State Retirement System (ASRS) is one of these pension funds. ASRS is facing a sizable amount of debt — nearly $16 billion — and it is banking on its investment returns to drive long-term fiscal recovery. The ASRS board of trustees has adopted a 7.5% assumed rate of return, and the investment team at the pension fund has built a strategy to try and go get that return.

“ASRS could reach a healthy funding ratio without any substantial alterations to the current level of employer contributions,” writes the Urban Institute in a new study. However, such calculations are “based on overly optimistic assumptions about how much the plan assets will earn over time.”

Basically, if ASRS’s actuarial and investment experience matches its assumptions exactly over the next 30-years, then the retirement system is on the road to recovering from its $16 billion in pension debt. However, Urban Institute’s analysis shows that even small disruptions in the market could lead to a significant funding shortfall, which in turn would require “substantial amounts of additional taxpayer funds” to reach a strong financial status.

The odds of a small disruption in the next 18–24 months are significant, much less within the next 18–24 years. As of spring 2019, financial experts are warning that the question isn’t if there will be another recession but just how soon. In fact, several of the strongest indicators of a looming recession have indicated one may be on the horizon. For example: Historically, whenever long-term bond yields fall below short-term yields, recession was a little over 1 year away — and this “inversion” of the bond yields happened in March.

The authors of Urban Institute’s report argue that a more reasonable assumed rate of return and “discount rate” (used to measure liabilities) is 5.3% because it is similar to what many private sector firms use and it matches the intermediate assumption used by Social Security in 2018. That may or may not be the right number for Arizona — elected officials and pension fiduciaries need to decide how much risk Arizonan’s are comfortable accepting, which could mean sticking with the current plan targeting 7.5%. But a 5.3% return certainly is more reasonable than the 7.5% assumed return currently being used. 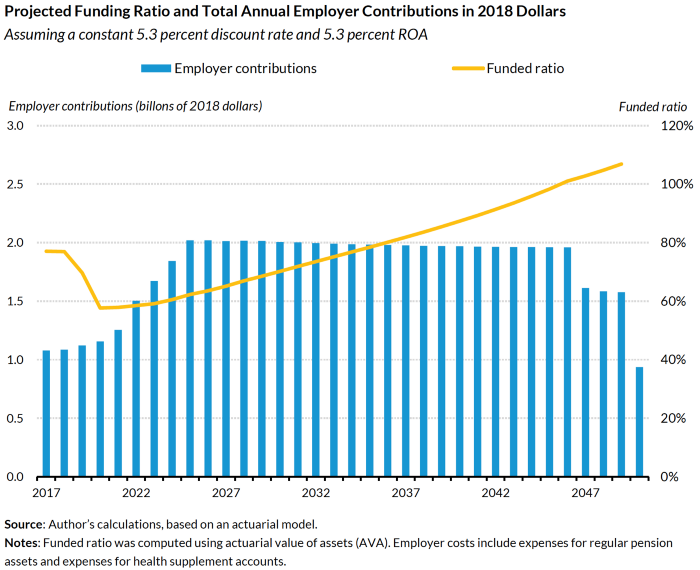 Using the 5.3% discount rate to measure the value of promised benefits, unfunded ASRS liabilities are closer to $27 billion than $16 billion. And, as shown in the forecast above, Urban projects that payments into the plan would need to rise to around $4 billion annually (split between the employees and employers) in order to keep the plan on a path to become fully funded before 2050.

Lawmakers, labor leaders, and other ASRS stakeholders are already aware of many of the issues the state faces. However, this independent analysis of the retirement system should raise the level of understanding that improvements are needed to ensure the long-term sustainability of ASRS.

To learn more about how ASRS benefit works, see this information page and pension calculator tool we developed to provide more educational resources.

To see a topline review the of the financial health of ASRS, download this PDF overview for key information.

This article was originally published on our Medium blog on May 2, 2019.

Iowa teachers’, public safety officers’, and public workers’ pension benefits are entitled to certain protections under state law and affirmed by court rulings. At the […]

American state and local pensions have less than 73% of the assets they need to fund future obligations to public workers, according to a survey […]