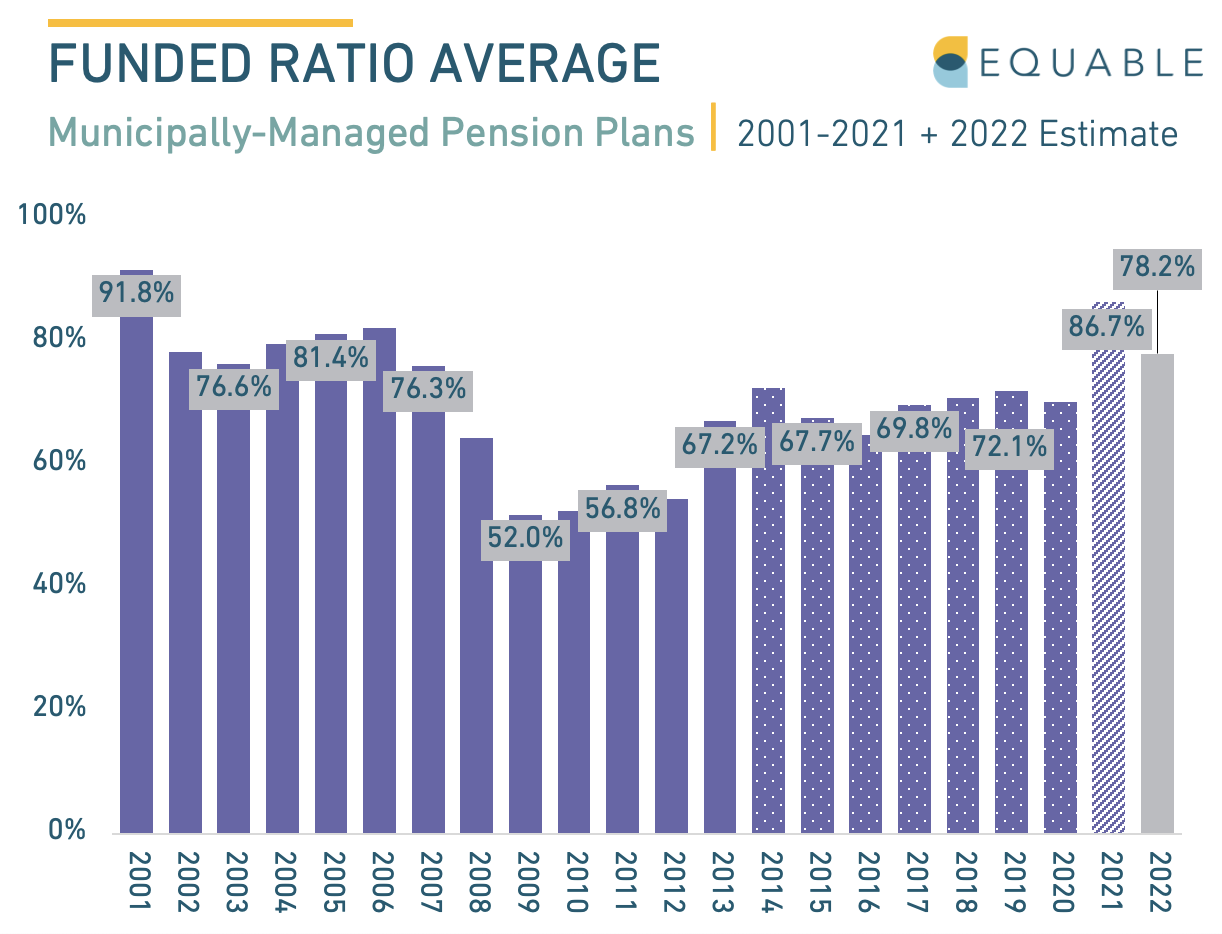 The majority of public pension systems in America are managed at the state level, even if the retirement benefits offered are for local workers. However, roughly 10% of promised pension benefits are managed by cities and counties (and a few school districts) for their own workers. The patterns and trends of local pension plans are similar to state pension plans, but underlying that data most of the averages are driven by just a few retirement systems in New York City, Los Angeles, and Chicago.

There are currently 61 municipally-managed defined benefit plans — or local pension plans — with over $1 billion in promised benefits (as of 2021). And the funded ratio for these pension plans tends to follow the same pattern as statewide plans, even if the absolute funded levels are a bit lower. For example, in 2009 local pension plans bottomed out at 52% funded while statewide systems were 63.8% funded.

Local pension plans face the same financial market dynamics as statewide plans. In both cases, pension boards are aiming to earn investment returns that can minimize how much government employers have to contribute.

One area that state and local plans differ is in pressure to make regular contributions. Municipal plans have historically been better at making full required contributions, in part because they have less budgetary flexibility and are more sensitive to reductions in their credit rating that might raise the cost of borrowing.

However, while paying the full required contribution each year is important, there are much larger factors that influence the emergence of unfunded liabilities — such as having an assumed rate of return that is too high or waiting too long on making changes to actuarial assumptions. In turns out that local plans often have higher assumed returns, creating a tacit kind of underfunding even when all “actuarially required” contributions were paid.

As a result, the overall funded status of local plans isn’t meaningfully better on average compared to statewide plans just because they have been better paying their bills.

While there are 61 large local pension plans spread across the country, the average funded ratio trends are generally dominated by just a few retirement systems in the New York City, Los Angeles, and Chicago regions.

Just seven retirement systems account for half of the pension benefits promised by largest local plans, all of them in California, Illinois, or New York. These seven are shown in Table 1 below in the first seven rows. The same table shows the 15 largest local retirement systems, also all in the same three large states, which collectively account for roughly 74% of all promised benefits from local pension plans nationwide:

Source: Equable Institute analysis of GASB 67 reports provided by the retirement systems. Data included from Omaha Police & Fire and Atlanta General Employees is based on accrued liabilities, due to lack of available GASB reports.

Because these select few retirement plans account for such a large amount of the promised benefits and funded status of municipally-managed retirement systems, as they go, so goes the average funded status of local pension plans. When looking over the past two decades at the funded ratio pattern for local plans (see the infographic at the top of this article), the pattern is effectively the same for all 61 local pension plans with $1 billion or more in liabilities and the 15 largest of that group on their own.

Pension Funds Need to Meet Their Assumptions, Not Beat Their Benchmarks

Three recent news stories highlight the need to have clear definitions of what success looks like for public pension investment returns. The news articles pointed […]

American state and local pensions have less than 73% of the assets they need to fund future obligations to public workers, according to a survey […]