New Report: Will You Be Affected by the Windfall Elimination Provision and/or Government Pension Offset?

With the new Windfall Elimination Provision and Government Pension Offset, public employees, like teachers, firefighters and police, face several questions as they near retirement. In addition to questions about employer-provided benefits, like a pension, they may wonder about whether they qualify for Social Security and other benefits provided by the federal government.

Some state and municipal governments enroll their employees in Social Security, but others do not. In some cases, a public employee might discover that the federal government is reducing their Social Security benefits because they qualify for a pension from their government employer. But why that reduction exists and how it is calculated are often confusing.

You may have heard of two rules that potential may cause your social security benefits to be reduced – the Windfall Elimination Provision and the Government Pension Offset. Today, Equable issued a comprehensive explainer to help public workers make sense of these rules and how they may be affected by them. 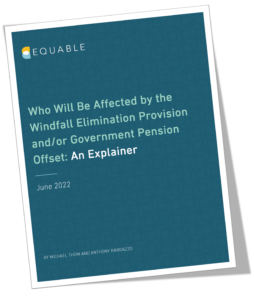 The paper discusses the two federal rules that can affect Social Security benefits for public employees with careers in “non-covered employment”—i.e., careers for agencies that did not participate in Social Security.

Because these rules can have a major impact on how public workers should plan for their retirement, it is important that all public employees understand how it may affect their retirement income. For those that want to dive deeper into specific aspects of the WEP and GPO, Equable will release additional content in the coming days and weeks.

Public pension plans often have higher education pensions that are better for employees in public K-12 schools in the same state. The 74 Million recently […]

While some states have laws forcing police officers to forfeit their pension if they’ve been convicted of a felony, Minnesota has no such legislation on […]