Oklahoma is considering changes to retirement plan provisions for its Public Employees Retirement System (OPERS), as presented in House Bill 2486 (HB2486). The stated intent of the legislation is to help improve the government’s ability to recruit public employees.[1] The state House adopted HB2486 on March 28, 2022. A committee in the state Senate amended HB2486 on April 4, 2022.

Equable Institute has analyzed the proposed changes by both the Oklahoma House and Senate using our Retirement Security Report methodology. We have published scorecards for each version of HB2486 that compares the how the proposed changes to retirement benefits would influence current and/or future OPERS plan members. The scorecards can be downloaded at the links below. Scroll down in the article for our complete analysis of the benefit provisions of the proposed legislation.

WHAT HOUSE BILL 2486 MEANS FOR WORKERS:

House: OPERS members would be no longer be offered a defined contribution plan and instead be enrolled in a defined benefit pension plan with lower overall benefits, but guaranteed income.

Senate: OPERS members would be offed a defined contribution plan that serves all members well, on average. There would be no option to select a pension instead.

We use a Benefits Score methodology that measures the future income value of retirement plans and compares this to a 70% “replacement rate” income adequacy threshold.

The tables above show the proposed plan’s total Benefit Scores, e.g., the percentage of available points for a given category. We also show how proposed changes would improve or decrease the Benefits Score of the current plan (the“score change”). And we show what the material effect would be on an average employee’s annual retirement earnings, using salary assumptions used by OPERS trustees.

For OPERS Members: The changes that HB2468 would mean are relatively similar for all OPERS members, but there are slight differences in the degree of change depending on if a member is classified as Regular, Hazardous, or Elected. To understand what HB2468 might mean for you based on your job classification or age of entry into the public workforce, see a detailed breakdown at the end of this article.

The proposed pension plan included in the House adopted version of HB2486 would provide substantially lower benefits to most OPERS members compared to the current defined contribution plan. This is primarily because the OPERS pension plan has no built-in inflation protection or crediting interest rate. However, the the proposed improvements to the OPERS defined contribution plan under HB2486 as amended in the state senate would increase retirement benefits for all members.

Pension plans are valuable because they can reduce investment risk for members, but the underlying benefit design provisions matter. For OPERS, the current defined contribution plan’s benefits are notably better than the legacy pension plan that HB2486 proposes to re-open. If the house adopted version had proposed a pension plan for current and new members with stronger benefit design provisions, then it is possible that the Retirement Benefits Scores would have exceeded the current plan.

The proposed changes in the Senate amended version are notably better than the version of HB2486 passed out of the House. That version would have reduced benefits for most members of OPERS, in exchange for the benefits provided being guaranteed income. Whereas the Senate version increases the value of retirement benefits for all members.

Assessing the Legislative Goals on Recruiting

Because the proposed pension plan does not provide meaningfully better benefits, it is unclear whether adopting HB55 would achieve the stated goal of its proponents to improve the ability of state agencies to recruit employees. However, even though OPERS benefits are better under the Senate amended proposed changes, it is not clear that version will help meet the stated goal of improving recruitment either.

However, theoretically the underlying concerns about the current retirement plan could be addressed by:
(a) creating a new pension plan with adequate benefit design provisions that is an option for future OPERS members to choose, while still offering the  current defined contribution plan. This could give state agencies an additional tool with which to recruit, even if it does not meaningfully help improve their ability to attract talent; and/or

(b) improve the current defined contribution plan by increasing employer contributions and offering lifetime income options to provide a better path to retirement income adequacy. This would be valuable to do even if it does not help with recruiting.

Over the past decade, OPERS stands out among statewide retirement systems for having rapidly paid down its unfunded liabilities. While most state pension plans stagnated during the years between the Great Recession and the onset of the Covid-19 Pandemic, OPERS climbed from a fragile 66% funded status in 2010 to effectively fully funded status today. We highlighted this in the 2020 edition of State of Pensions, and the story has also been documented by Rod Crane for Reason Foundation.

One of the reasons why OPERS was able to close their funding shortfall was a legislative commitment to paying in more than actuarially recommended each year. These overpayments will help make costs in the future lower. While this was a positive approach, unfortunately another method that Oklahoma used to reduce the OPERS funding shortfall was eliminating retirees cost-of-living adjustment. This has been helpful for the funded status of OPERS, but reduced benefits for members of the pension plan.

There are definitely better ways to approach improving benefits: Theoretically, a new pension plan could be created with benefits that are more likely to provide members with adequate retirement income. Current members could also be given the option to keep their defined contribution account, and/or all future members of OPERS could be given a choice between a pension plan and the current defined contribution plan. Or the current plan being offered could be enhanced by offering members a lifetime income option, such as converting accumulated account balances into an annuity upon retirement.

The tables below show complete, detailed Benefits Scores for HB2486, both the House adopted and Senate amended versions. Each table compares those Benefits Scores to the current plan. 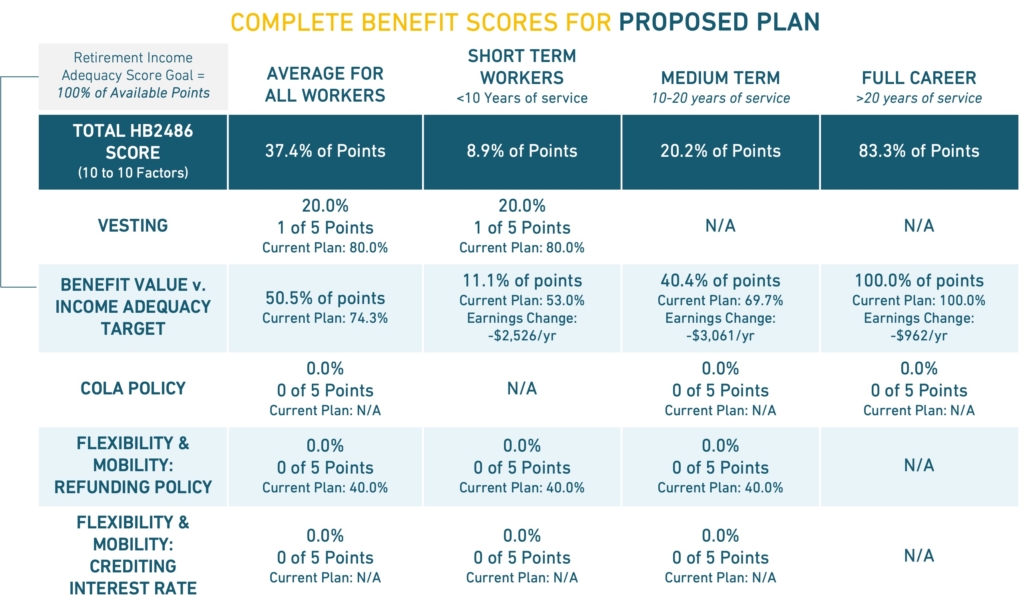 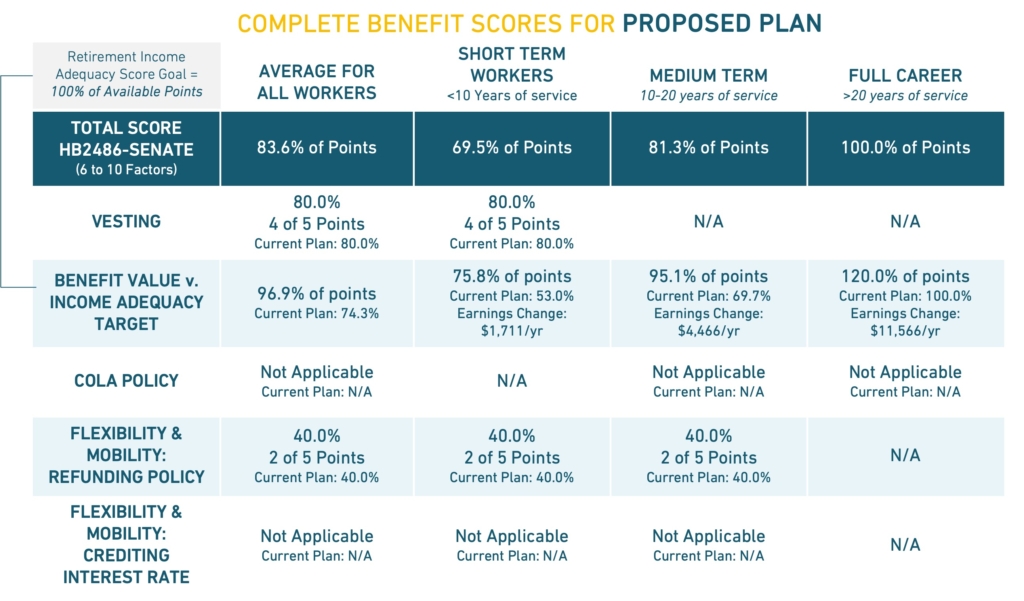 In the above tables, we combined and summarized various factors to create a quick way to easily compare plan scores. However, the detailed breakout here makes it clearer to see where the proposed plan and current plan perform better or worse for different types of workers (Short-Term, Medium-Term, or Full Career), different classifications of workers(Regular, Hazardous, or Elected), and different ages when starting employment. Underneath select tables is a figure that shows a comparative forecast for the value of benefits over time.

The tables below show the proposed plan’s total Benefit Scores, based on how old a member is when they are hired. We also show how proposed changes compare to the current plan for the same kind of public worker. And we show what the material effect would be on an average employee’s annual retirement earnings, using salary assumptions used by PERS trustees. Underneath each table is a figure that shows a comparative forecast for the value of benefits over time 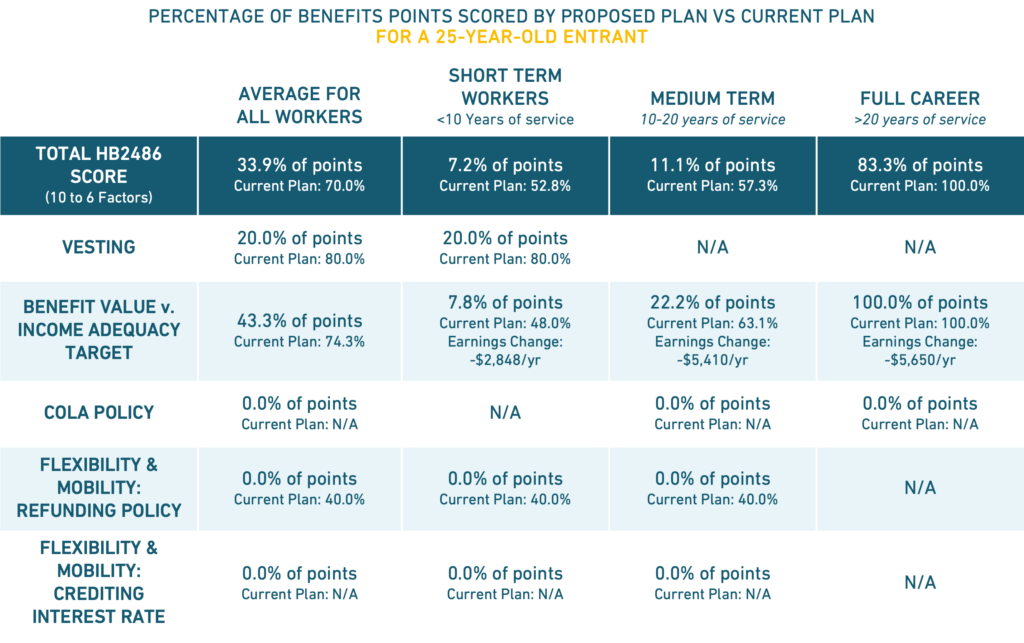 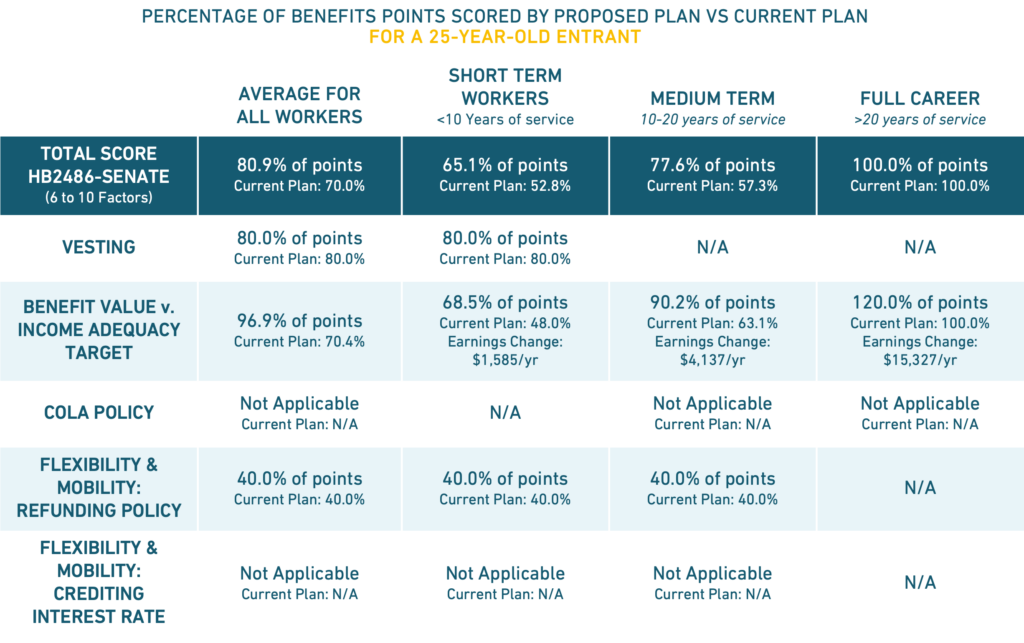 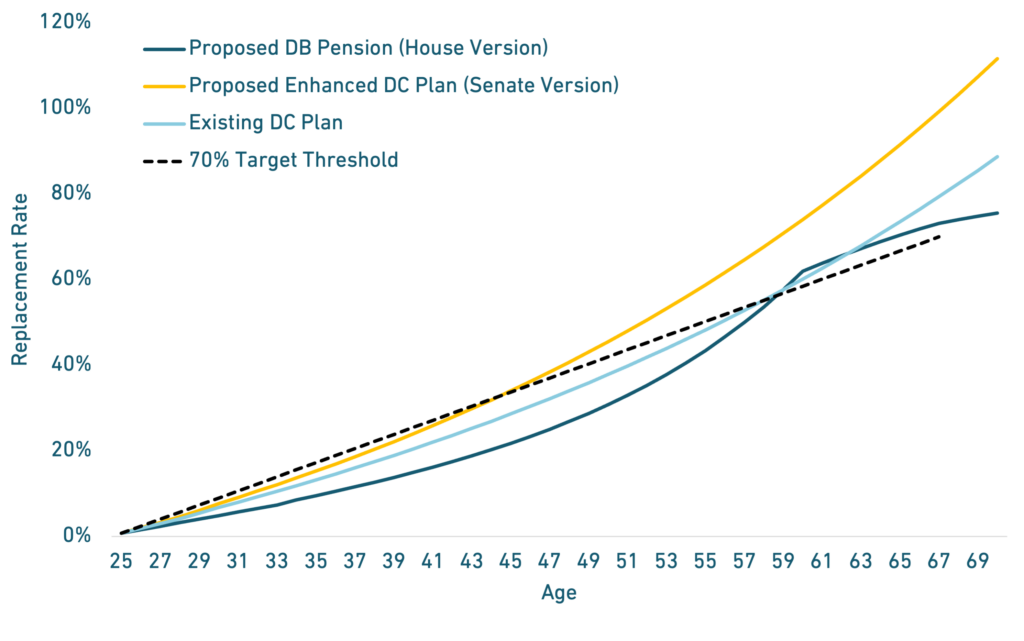 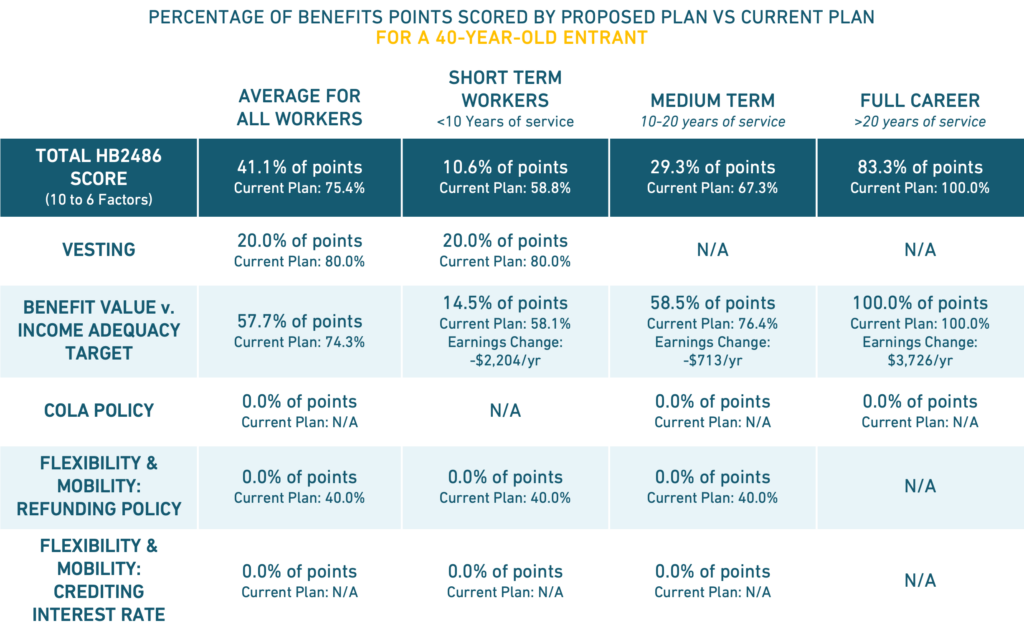 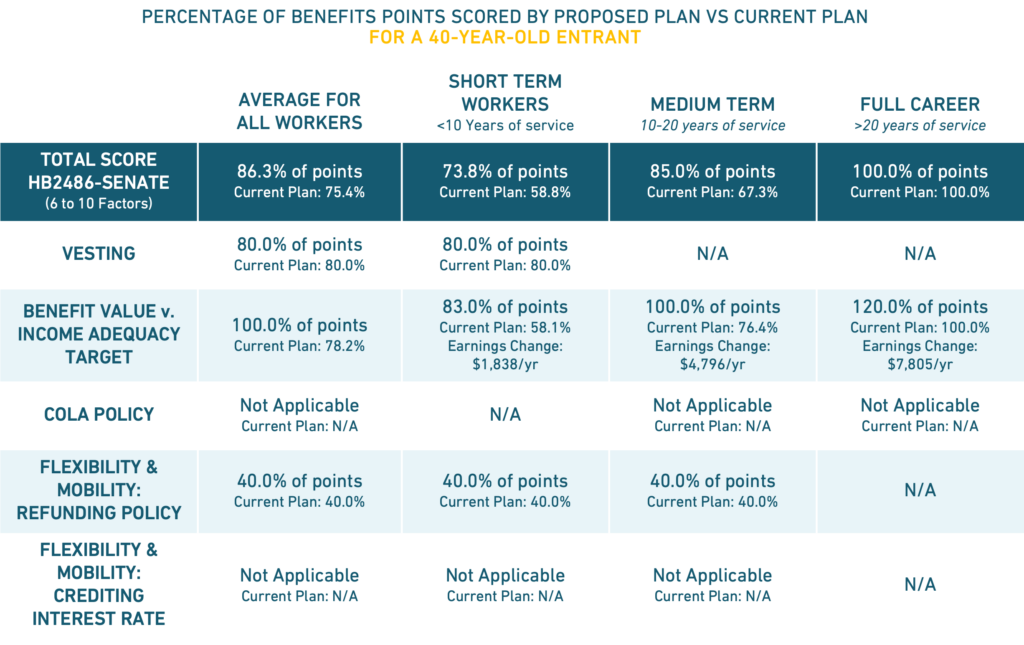 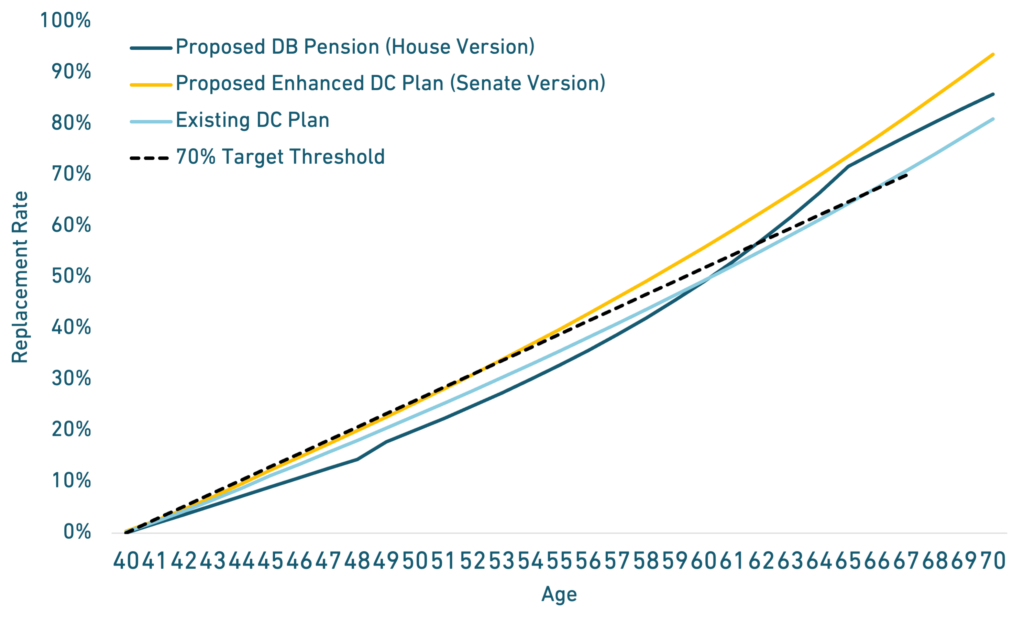 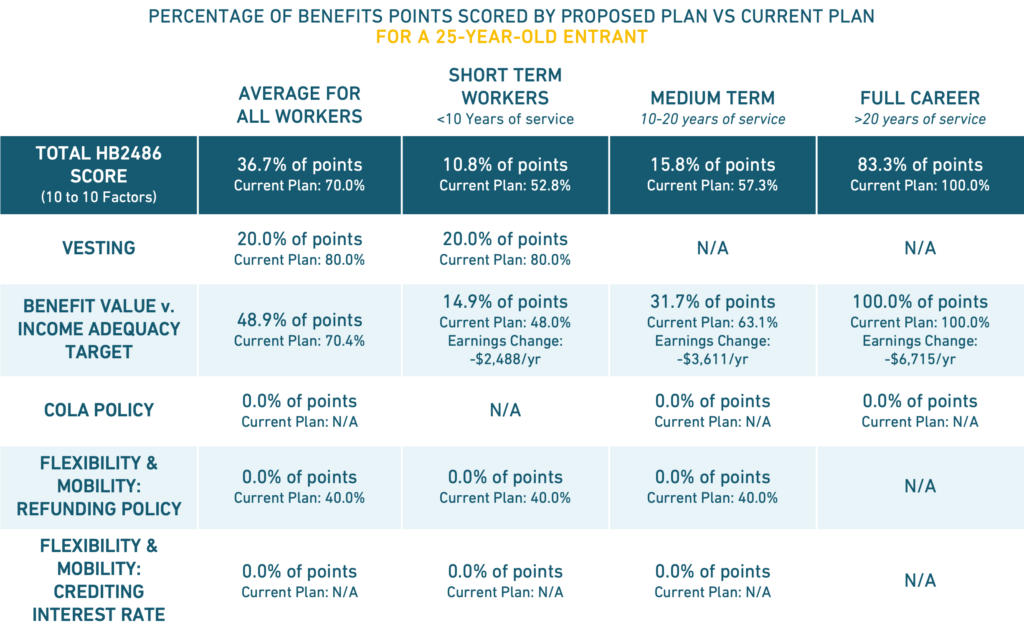 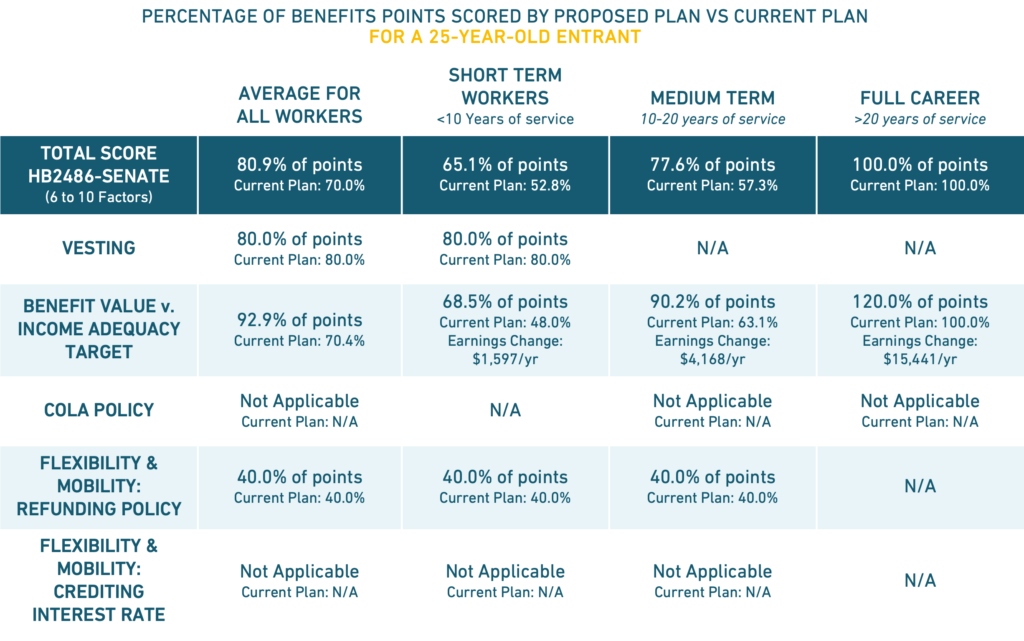 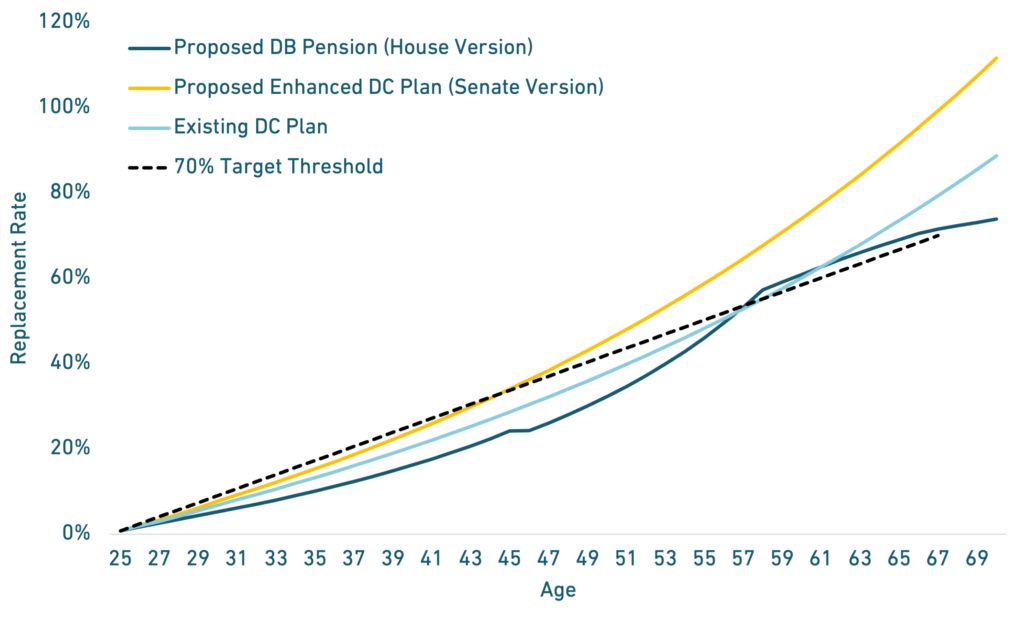 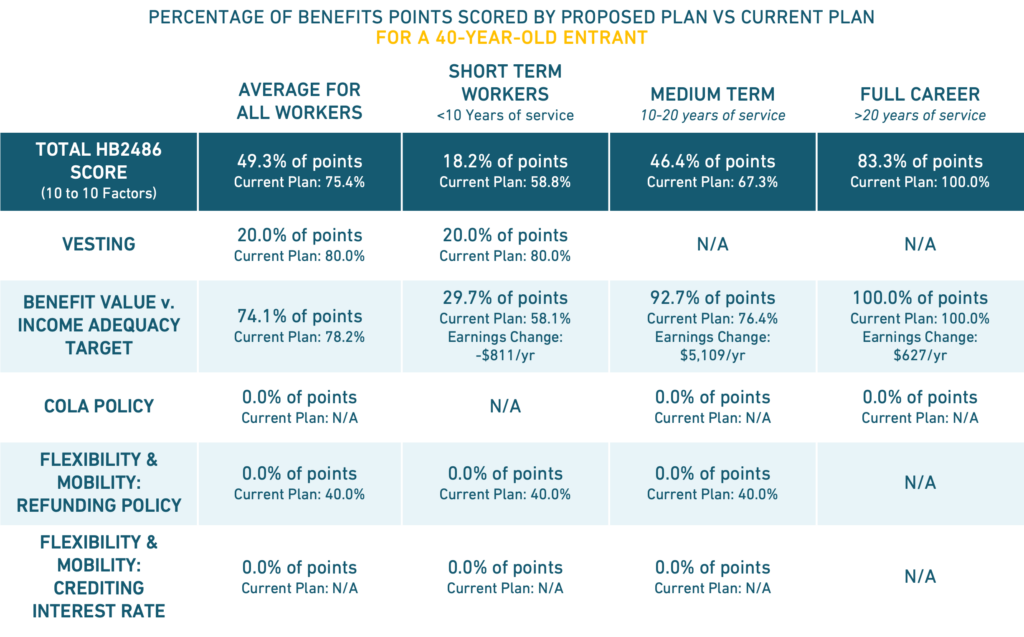 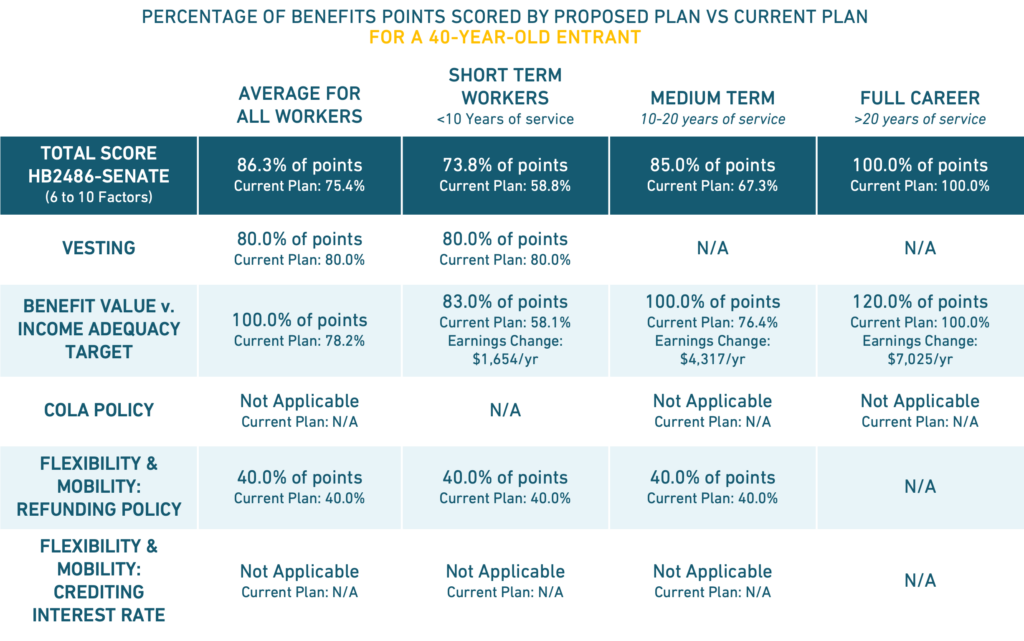 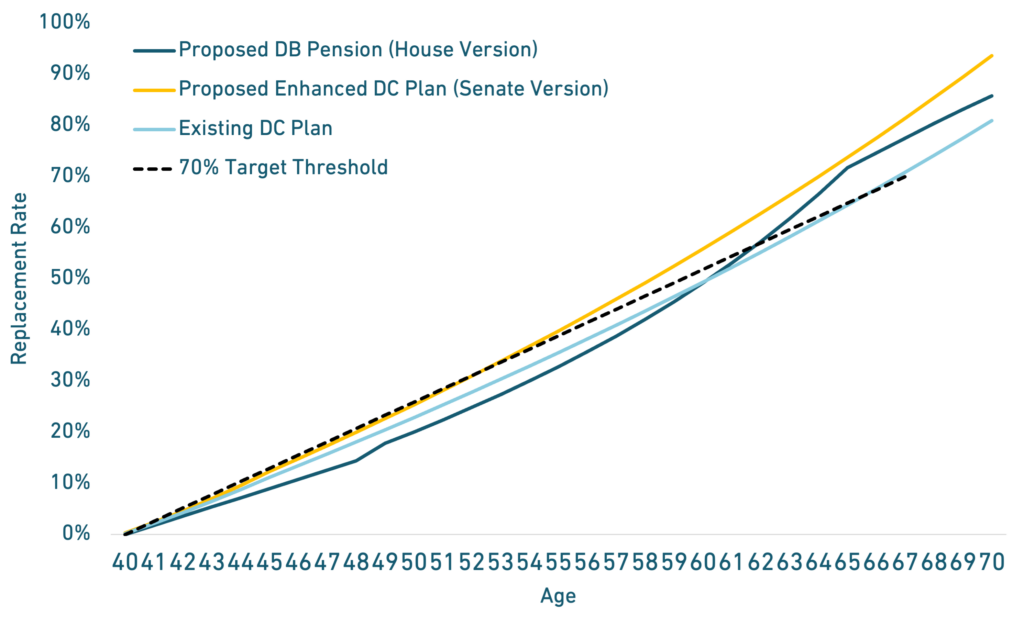 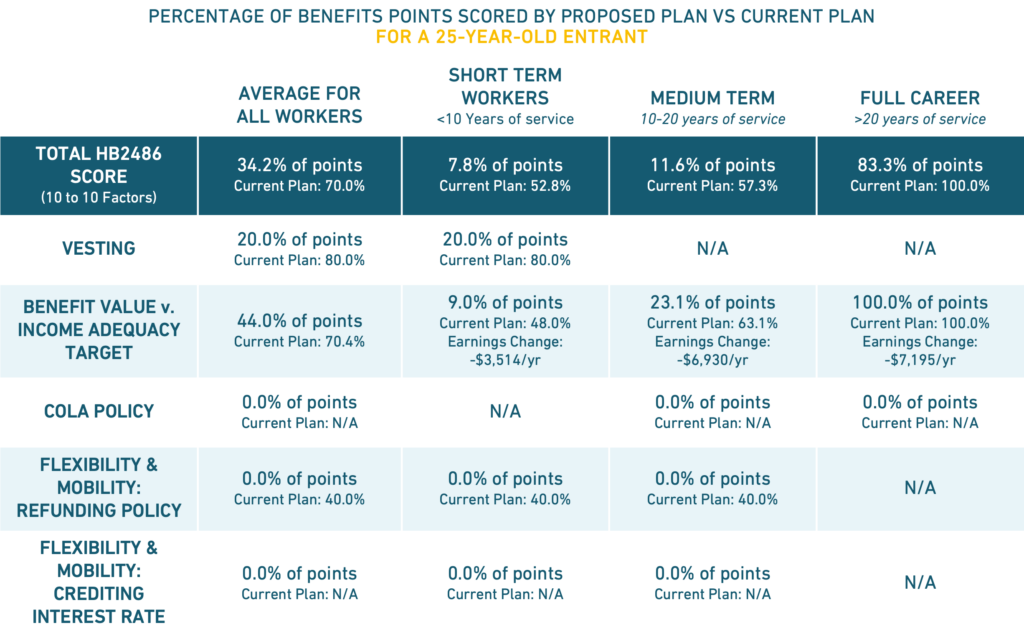 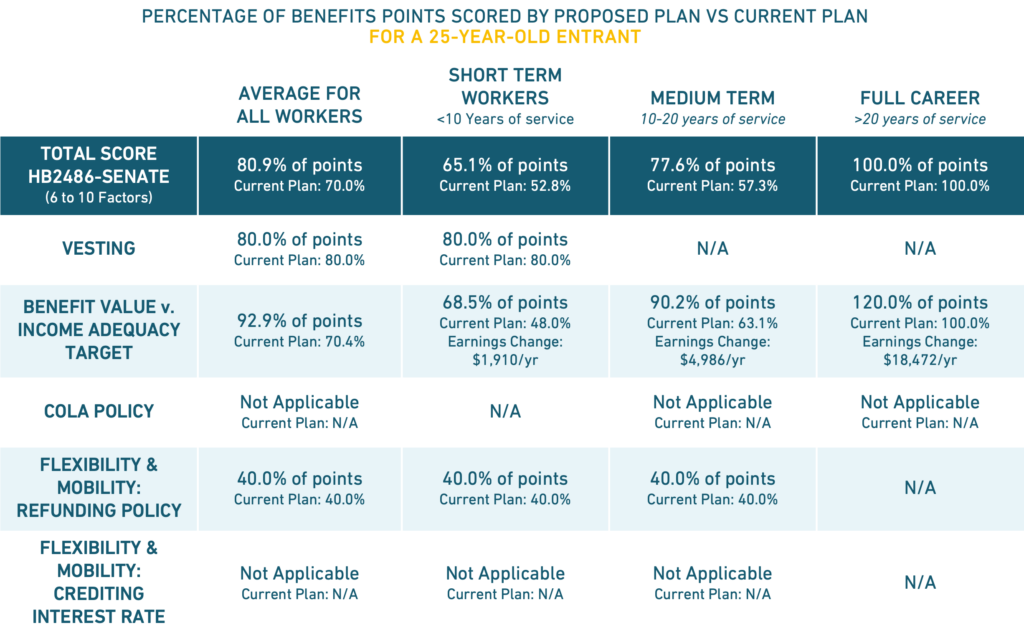 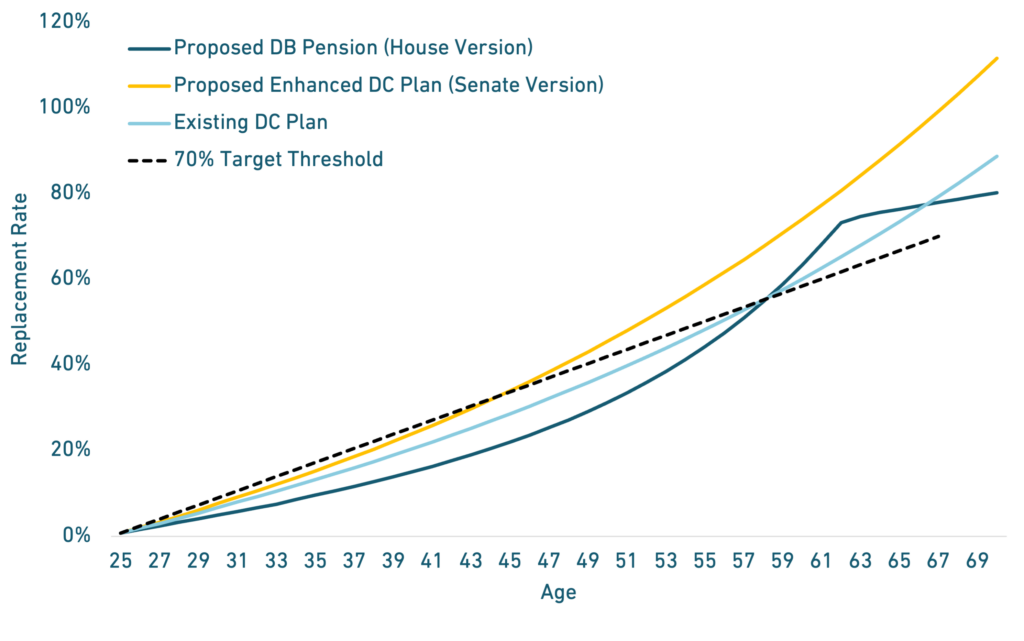 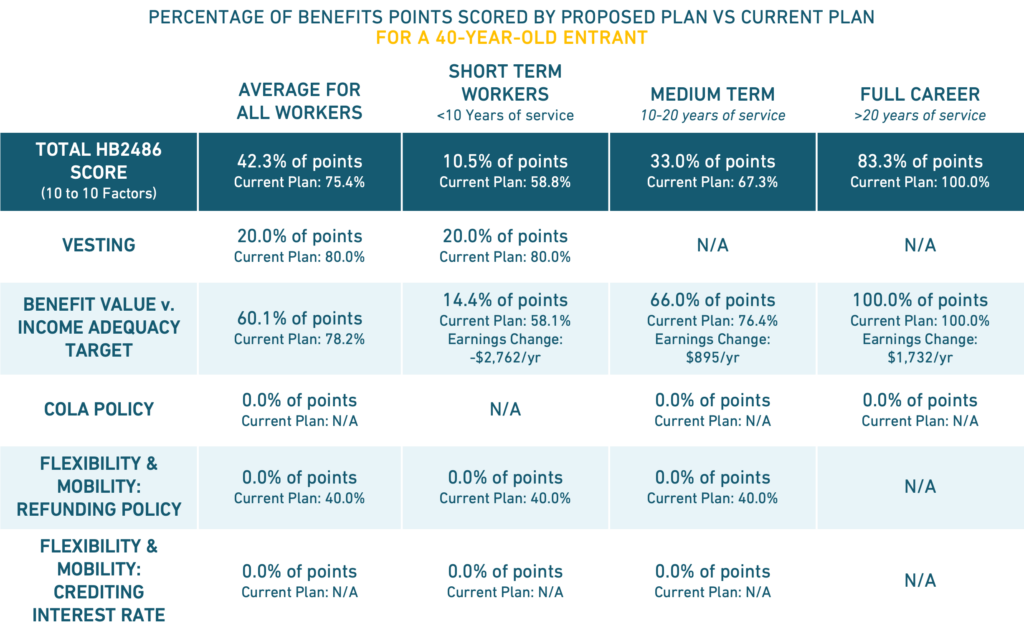 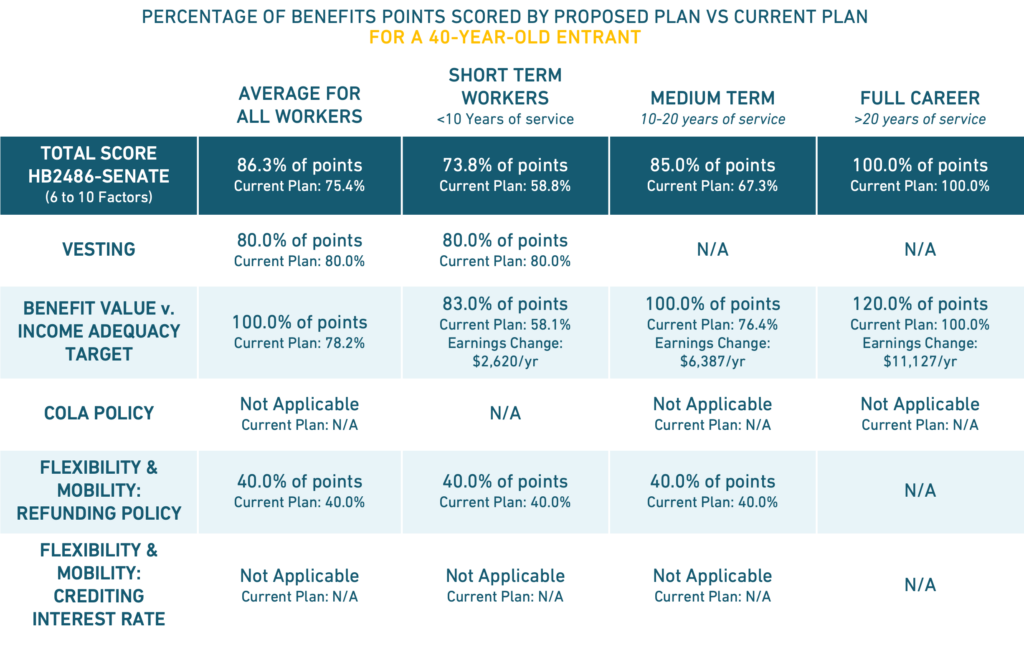 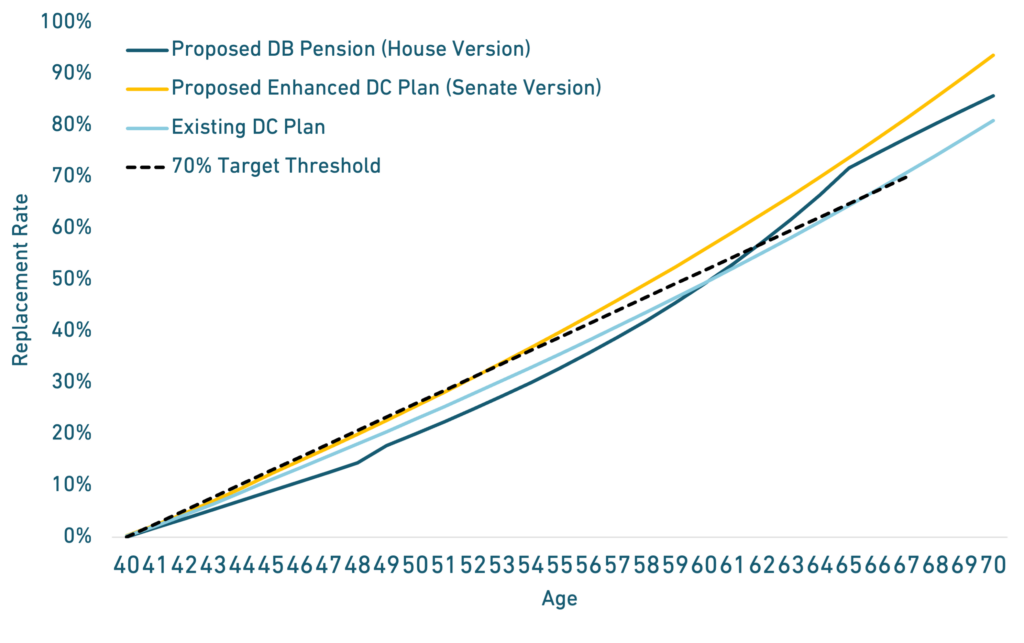 [4] The RSR’s Benefit Scores consider a range of factors including eligibility, income adequacy, inflation protection, mobility, and more. Defined benefit pension plans are scored on 10 factors; defined contribution plans are scored on 6 factors. To ensure appropriate comparison between such plans we report the percentage of available points scored across these factors. For a complete list of factors that are used to measure different kinds of retirement plans visit RetirementSecurity.Report and read the methodology.

[5] The Oklahoma Public Employees Retirement System has in the past offered a cost-of-living adjustment, but it is currently suspended and formally set at 0%. In 2020, the Oklahoma legislature authorized a one-time COLA, but the ad hoc payment did not change the current suspension of inflation adjustment of benefits. Therefore, we formally score OPERS as currently having no built-in COLA.

[6] Most individuals who become peace officers, firefighters, teachers, or other public workers join because of a personal commitment to the profession, for salary, for health benefits, for secure employment, or because of a family/friend connection. Few individuals make any job choice solely because of retirement plan benefits, no matter the underlying design. There is some evidence to suggest that pension plans can encourage retention of individuals after 15 to 20 years of service, but those effects only have been found with ”very generous” benefit values and low member contribution rates, and some academic analysis has found no meaningful retention effects from retirement plan design. For more see, academic analysis from Stock and Wise 1990; Coile and Gruber 2007; Behagel and Blau 2012; Brown 2013; Clark, Hanson and Mitchell 2016; Ni and Podgursky 2016; Morrill and Westhall 2018; Quinby and Sanzenbacher 2020

[7] The RSR’s Sustainability scores are an abridged assessment of the financial condition of a retirement system based on investment performance relative to assumptions, the historic consistency of state legislatures ensuring actuarially determined contributions are paid, the existence of risk-sharing tools, and whether the amortization period is projecting full funding in a reasonable period. For complete background on why we use these select factors visit RetirementSecurity.Report and read the methodology.

In California, School districts’ unfunded pension and benefit costs are rapidly increasing at a rate that will become unsustainable. While districts paid approximately $500 per […]

Download The Report | The Contribution Rate Keeps on Growing: Why Persistent Pension Debt Has Created Challenges for ASRS That Arizona Should Fix as Soon […]

U.S. public pension investment losses in 2020 were heavy. The global rout of financial markets this year is putting pressure on state and local government […]