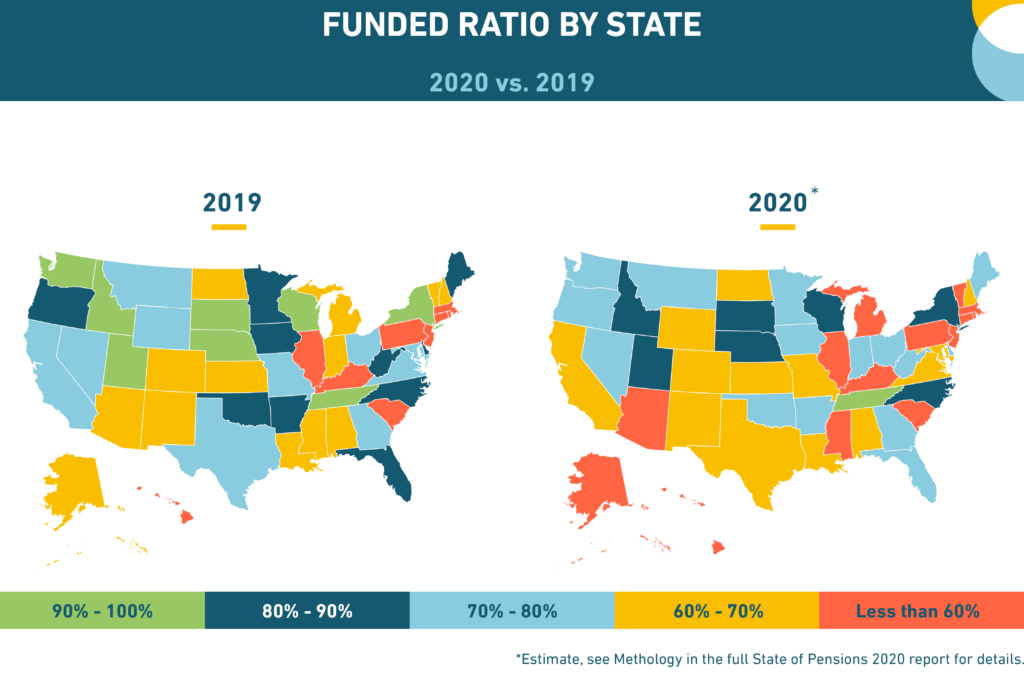 Equable Institute estimates that only one state, Tennessee, will maintain its resilient funded status in 2020, as a result of the losses and underperformance caused by the COVID-19 Pandemic Recession.

U.S statewide pension funds entered the COVID-19 recession profoundly weaker than they were financially going into the Great Recession, a new report on national pension funding trends from Equable Institute shows. In this post we will look at the core reasons behind the modern public pension fund’s systemic vulnerability. While America’s recent period of economic strength bolstered earnings on Wall Street, the 11-year growth in investment earnings failed to close the national pension funding gap. Actually, the funding shortfall for statewide pension funds expanded over the past decade, and mandatory paycheck contributions for public employees increased.

What is the public pension funding gap in 2020?

The national pension funding shortfall for statewide retirement systems was $1.35 trillion at the end of 2019, per Equable Institute’s State of Pensions 2020 report. The funding shortfall — formally called unfunded liabilities — is the gap between money held by pension funds and the value of all future benefits it has promised to pay. This is also sometimes called pension debt.

Equable Institute’s report estimates that this shortfall will grow to more than $1.6 trillion in 2020 as a result of COVID-19 losses and underperformance. On average, this means that American public pension plans are currently holding only 67.9% of the assets required to pay future retirees their pension benefits.

By contrast, in 2007 before the Great Recession, statewide retirement systems in the U.S. had 93.8% of the money promised to current and future public retirees. Losses because of the Financial Crisis of 2008 knocked this funded ratio down to 80%. And as of 2019, before the COVID-19 Recession, the average statewide pension fund was roughly 73% funded. 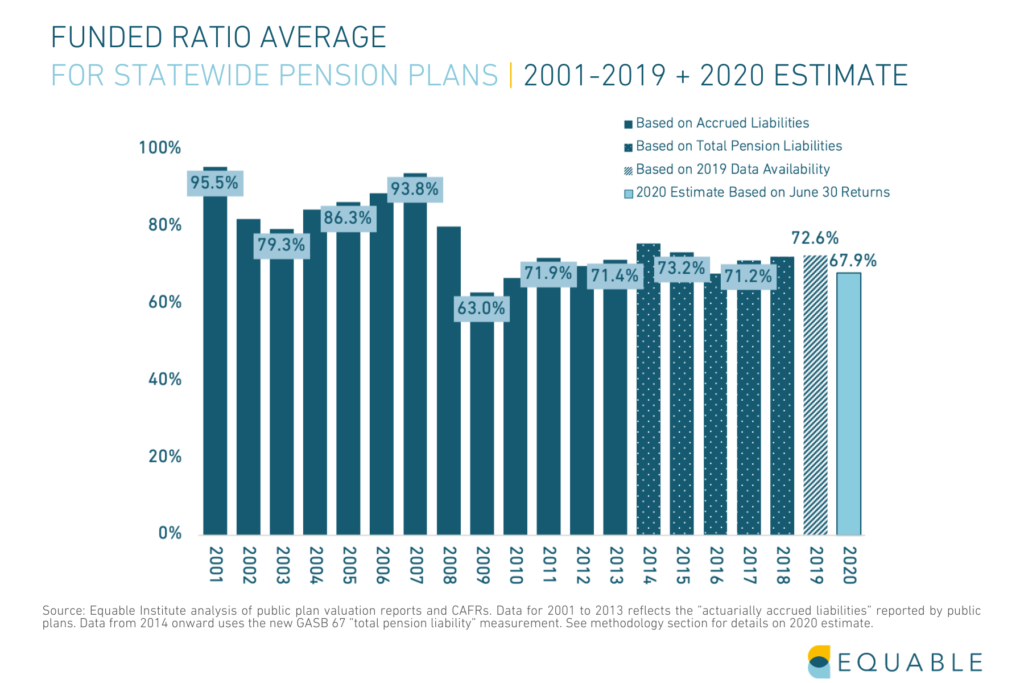 Equable Institute found that the aggregate funded ratio for U.S. public pension funds was lower in 2019, going into the pandemic economy than it was in 2007 going into the Great Recession of 2008.

All of this means that pension funds never fully recovered from the economic losses of the last recession. Which suggests many pension funds in the U.S. will have a harder time achieving full funding coming out of the COVID-19 Recession, as they have entered the economic downturn in a weak position.

Why is the national pension funding gap growing?

For several years, a significant gap between projected earnings and fiscal reality has existed for public pension plans in many states. Still, the assumed rates of return used by many statewide retirement systems have remained significantly higher than actual investment earnings. A handful of states have meaningfully reduced their assumed rates of return in response to economic shifts. 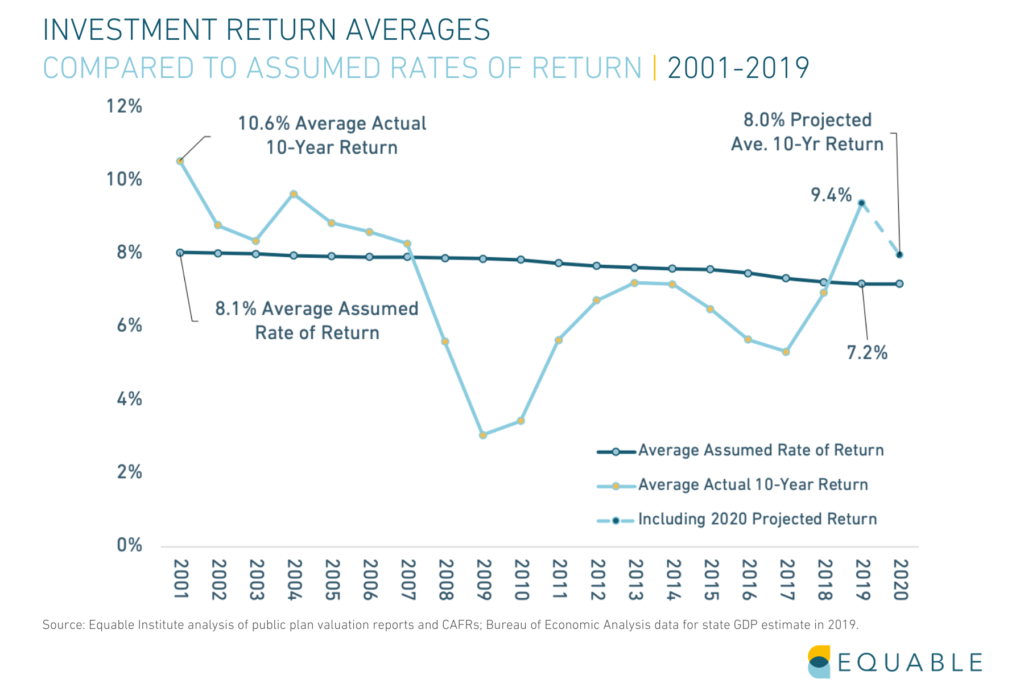 In State of Pensions 2020, Equable Institute shows that assumed rates of return have been overly optimistic, when compared to actual investment returns for the same period (2001-2019). Most years since 2007 have underperformed, leading to a growing funding shortfall. 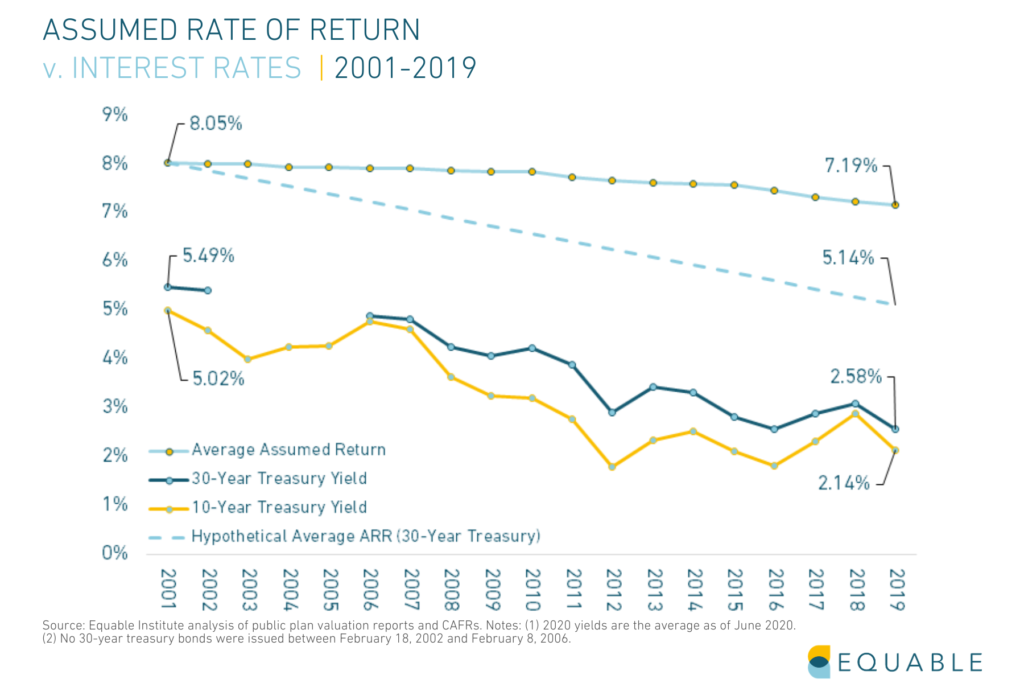 Equable Institute estimates that if assumed rates of return for U.S. public pension funds had kept pace with interest rates since 2001, the average assumed rate of return would be 5.1% today. It is 7.2% as of 2019.

The pension debt carried by governments is costly to pay down and creates pressure on the public budget. It may cause an increase in required pension contributions for public employees or benefit reduction like the elimination of cost-of-living (COLA) adjustments for retirees. In times of economic hardship, it may result in higher property taxes, delayed raises,  cuts in school funding, and a reduction in essential services like public sanitation. 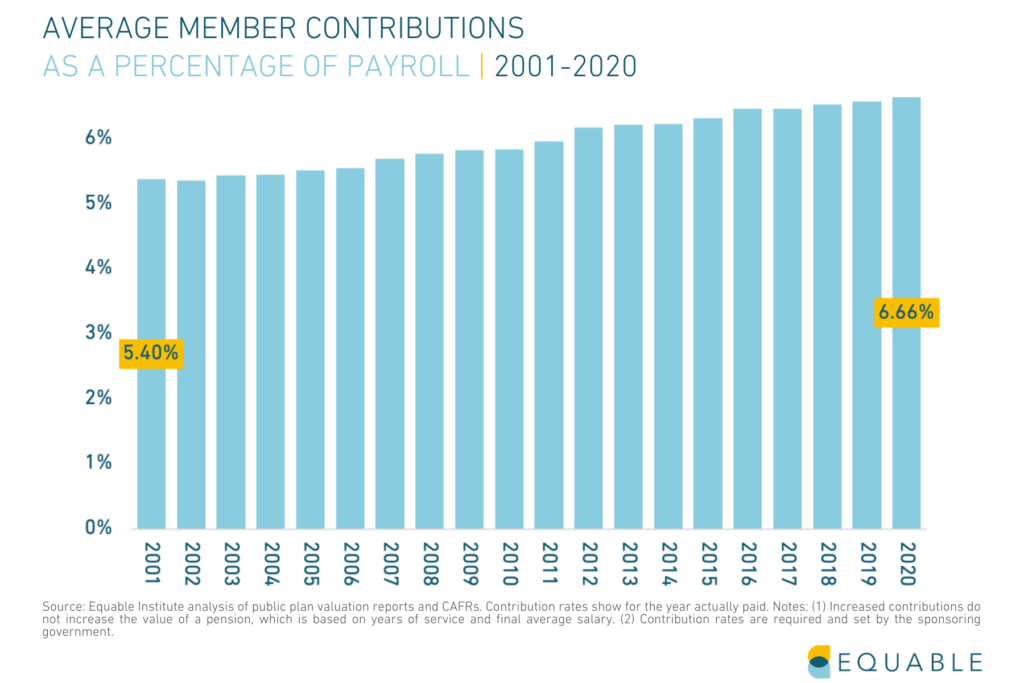 Public employee paycheck contributions have grown significantly over time, due to rising pension debt and risk-sharing policies in many states.

Public pension plans have increasingly moved away from a reliance on relatively safe fixed-income investments during the past decade, per Equable Institute’s report. 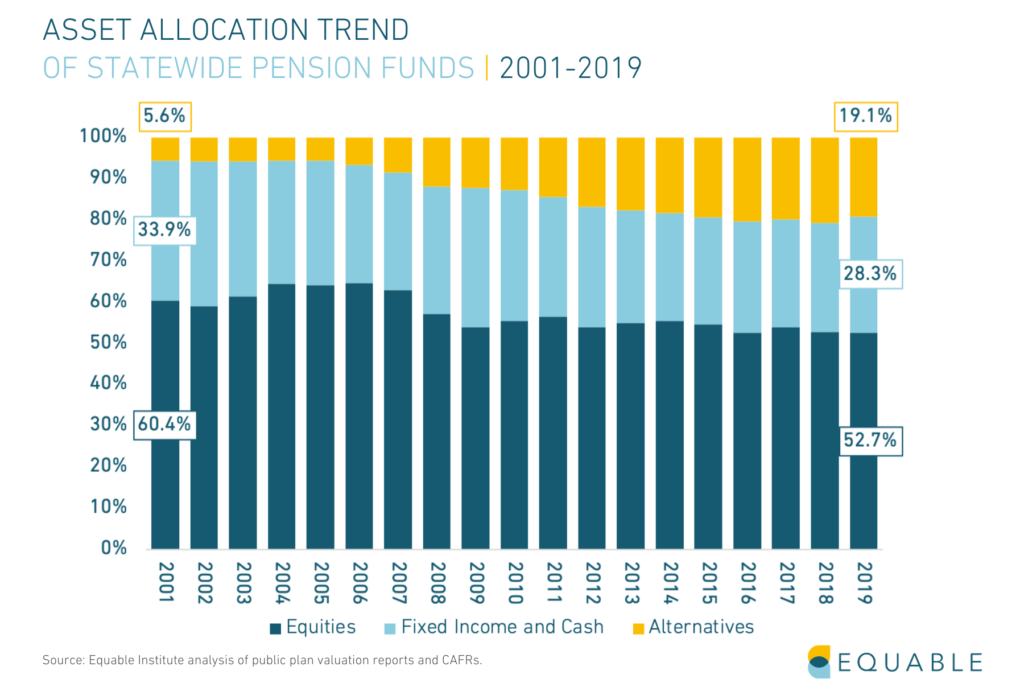 The State of Pensions 2020: Most Public Pension Systems Are Financially Fragile or Distressed

As the prospect of a resilient stock market dwindled when the pandemic took hold of the economy in 2020, so did the possibility of many pension funds receiving their projected investment returns.

Compounding this is the effect of the pandemic’s disruption of tax income. This revenue is essential for states being able to make their required contributions to fund pension benefits. That combined with underperforming investments means it is likely that pension debt (or unfunded liabilities) will likely continue to grow in the coming years. 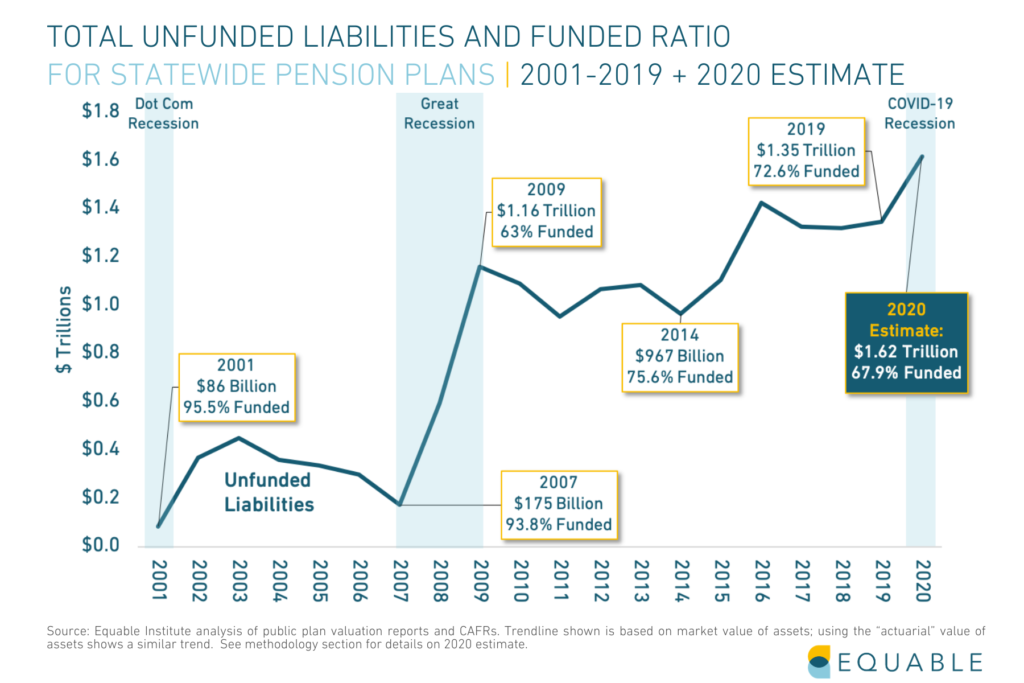 Equable Institute projects that pension debt will grow to $1.6 trillion in 2019.

Prior to the pandemic, unfunded liabilities already accounted for a large share of states’ GPDs.  In some states, like Illinois, Kentucky and New Jersey, pension debt tops 15% of the state GDP, a significant challenge for a government even in a strong economy. 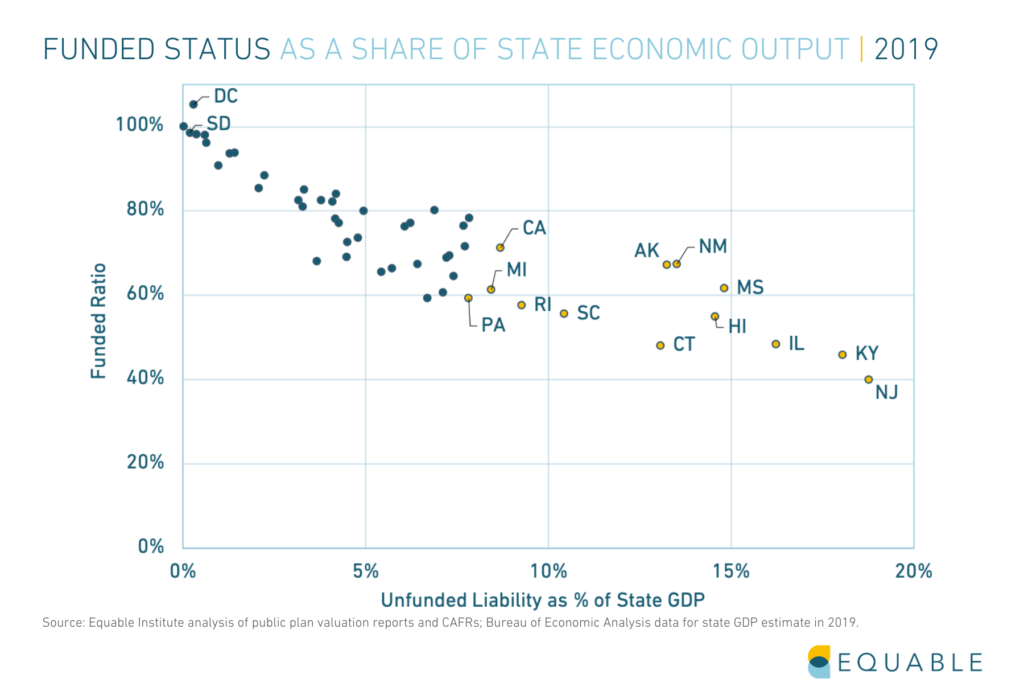 Equable Institute found that states with pension funding challenges often have a high rate of unfunded liabilities relative to GDP.

Today, only one in five statewide pension plans are considered economically resilient, according to the Equable Institute report, which means holding assets that cover 90% or more of promised public employee pension benefits for at least a few consistent years.

The pandemic has illuminated the financial challenges facing many public pension funds across the country.

To learn more about public retirement benefits in your state, check out the interactive Retirement Security Report.

Equable Institute on June 24 launched the first edition of the Retirement Security Report, an interactive digital report that evaluates the quality of public retirement […]

Pension plans are designed to collect contributions from active workers, invest that money to produce a return, and use those combined contributions and investment returns […]