What is a Defined Benefit Plan?

The thing being “defined” in defined benefit pension plan is a formula that will be used to determine future retirement income.

That formula is based on three things:

Notably, the formula does not take into account the amount of money actually saved or even what is contributed into the pension fund. The money contributed by employers and pension plan members matters for building up assets that can pay promised benefits, but the benefit amount paid is only based on the pension formula.

Here is a way to visualize how pension formulas work:

The “multiplier” in the formula is used to determine the percentage of your final average salary that you will receive as a retirement benefit. Your years of service are multiplied using this specific number. That amount becomes a percentage of your final average salary. And the result equals the amount you’ll ultimately receive as a benefit when you retire. The higher the multiplier, the larger the benefit. Multipliers are sometimes known by other terms, such as “accrual rate” or “crediting rate” but they mean the same thing.

A typical multiplier for defined benefit plans is 2%. So, if you work 30 years, and your final average salary is $75,000, then your pension benefit would be calculated like this: 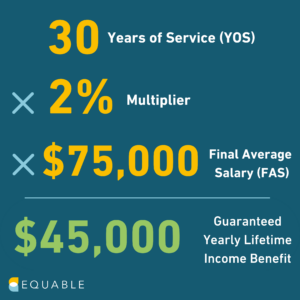 An important way to think about the formula: in this example the result of 30 years of service is a pension that is worth 60% of the final average salary. The 30 years are multiplied by the 2% multiplier, and that is equal to the 60% replacement rate.

Other Kinds of Defined Benefit Plans:

The thing being defined in a guaranteed return plan is a minimum investment return on contributed assets.

Members of retirement plans and employers both make contributions into guaranteed return plans. The retirement system that collects the money manages the assets and invests on behalf of all employees enrolled in the plan. Members get at least a certain amount of investment return — such as 4% — plus they can share in the upside returns above this minimum guaranteed rate.

These kind of retirement plans are most common in Kansas, Kentucky, and Texas. A typical example is employees contributing into a guaranteed return plan account, promised 4% minimum returns, and three-quarters (75%) of any returns above that minimum. So if a retirement system earns 8% returns in a given period of time, members of the plan will get 7% returns on their money and 1% will be aside to help ensure guarantees in the future will be paid when investments are low.

When an individual retires all of the money they have accumulated in their guaranteed return plan account can be converted into an “annuity” which pays out a lifetime stream of income, just like a pension.

The Pros and Cons of Defined Benefit Plans:

There are various ways that retirement benefits can be offered. Each can be measured against different kinds of objectives. Here is how defined benefit plans compare to other retirement plans on a few common goals that states and local employers have for offering retirement benefits in the first place.

What is a Defined Contribution Plan?

In a defined contribution plan, also known as a cash balance plan,  you and your employer each contribute a specified amount to your individual account, […]

What is a Guaranteed Return Retirement Plan?

A guaranteed return plan builds retirement income for participants by creating notionally personal accounts for each employee, and blending investments to be managed by a […]

What is a Hybrid Retirement Plan?

In a hybrid retirement plan, your employer provides access to two compatible benefit structures at the same time. A typical hybrid plan combines a small […]