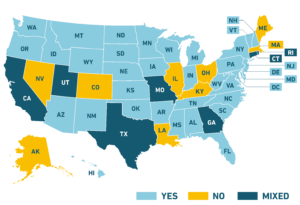 Why? When Congress created Social Security in 1935, it excluded state and local workers because of constitutional concerns that the federal government could not tax states and municipalities. In the 1950s, Congress amended the Social Security Act to allow, but not require, state and local governments to enroll their employees. Most states opted in, but more than one third of the country’s teachers live in states that didn’t, resulting in their lack of coverage today.

Read more about why teachers do not have universal access to Social Security at NPR.org and TeacherPensions.org

Note that the map above only reflects Social Security participation for teachers and educators. For a map of participation coverage for state, municipal, and public safety workers see here.

It is important that public sector pension funds receive adequate contributions each year in order to maintain a healthy funded status, or make progress on […]

For America’s states and local governments to function properly and thrive — that is, to provide effective and efficient governance — the institutions within its […]