Alaska is considering changes to plan provisions for peace officers and firefighters who are members of the Public Employees’ Retirement System (PERS), as presented in House Bill 55 (HB55), introduced in February 2021. The stated intent of the legislation is to improve recruitment and retention of public safety officers by replacing the current defined contribution plan with a pension plan.[1] Equable Institute has analyzed the proposed changes using methodology from the Retirement Security Report to measure how changes to benefits would influence current and/or future retirement plan members.

WHAT HOUSE BILL 55 MEANS FOR WORKERS:

PERS public safety members would be offered a pension plan with inflation adjusted benefits in exchange for slightly lower overall annual earnings compared to the status quo. Our scoring methodology measures retirement plans based on how the benefit value they provide compares to an income adequacy threshold (reaching or exceeding 70% of an individual’s final average salary).

The table below shows the proposed plan’s total Benefit Scores, e.g., the percentage of available points for a given category. We also show the Benefits Score of the current plan as a point of comparison. And we show what the material effect would be on an average employee’s annual retirement earnings, using salary assumptions used by PERS trustees.

For PERS Members: To understand what HB55 might mean for you based on your age of entry into the public workforce, see a detailed breakdown at the end of this article.

The proposed pension plan under HB55 provides slightly worse retirement benefit values for most Alaska peace officers and firefighters compared to the current defined contribution plan, though overall the benefit values are similar.

As a practical matter, it might be reasonable to consider the benefit values of these plans as similar — the proposed pension plan would have inflation adjusted guaranteed benefits; the current defined contribution plan has larger potential upside and greater portability of benefits.

The underlying benefit provisions of HB55 create a modest benefit, but in the absence of Social Security or other supplemental retirement income benefits HB55’s projected benefits are not strong enough to provide all PERS public safety members with a path to adequate retirement income.

Because the proposed pension plan does not provide meaningfully better benefits, it is unclear whether adopting HB55 would achieve the stated goal of its proponents to improve retention.

However, theoretically the underlying concerns about recruitment or retention of public safety employees theoretically could be addressed by:

(a) improving the benefit values designed in HB55,

(b) adding the option of an adequate pension plan alongside the status quo plan, and/or

Since any projection about future retirement income requires certain assumptions about investment returns, salary growth rates, and more, it would be reasonable to consider the scores for these two plans to be roughly equivalent across the board. There are some minor ways that either the status quo plan or proposed plan might be better or worse than the other, but they are all marginal improvements or regressions — with the exception of the pension plan’s built-in cost-of-living adjustment.

The status quo retirement plan is projected to create larger initial retirement income for all three worker-types in our analysis, compared to the proposed pension plan. However, the status quo defined contribution plan does not have built-in inflation protection. And the proposed pension plan does offer this, which enhances its value for Medium-Term and Full Career Workers.

The proposed HB55 could have a significant, negative effect the funded status for Alaska PERS.

Re-opening a pension plan is not inherently a problem. However, a key challenge for the legacy PERS pension plan has been investments underperforming actuarial assumptions about rates of return. Allowing current members of the defined contribution plan to switch and enrolling future hires into the pension plan would add liabilities that are assumed to be funded by unrealistic investment returns.

The Alaska Retirement Management Board (ARMB) is currently using a 7.38% assumed rate of return for PERS, which is above the 7% national average, well above industry estimates for returns in the coming years, and implicitly reflects considerable risk.[10] Any new pension fund set up using that kind of investment assumption is likely to develop unfunded liabilities quickly.[11] Any new pension fund that allows defined contribution plan members to switch over based on a 7.38% assumed rate of return will effectively be underfunded from the start.

HB55 does attempt to include some risk-sharing provisions for the proposed pension plan. ARMB would be given the authority to increase member contributions from 8% of salary to as high as 10%. ARMB would also be allowed to reduce the “Postretirement Pension Adjustment” (elsewhere considered a cost-of-living adjustment) if the funded ratio for the new pension plan falls below 90%. In general, these are not bad policies. However, they are very minimal risk-mitigation rules and do not mirror shared-risk and cost-stabilization tools used by the best funded retirement systems in the country.[12]

Actuaries for Alaska PERS have found that HB55 would cost more than the status quo plan, primarily because of higher employer contribution rates required under the proposed legislation. Increased costs are not inherently a bad thing, particularly when they mean increased compensation for public workers or if they mean ensuring a retirement plan is being adequately funded. However, it appears that the benefit values offered by HB55 are slightly worse than the status quo. For select peace officers or firefighters it might be that the proposed pension plan is better for them, depending on the number of years that they work and the timing of returns for defined contribution plans. However, our analysis suggests that this bill would have higher costs for lower benefits for most future PERS peace officers and firefighters.

Based on these elements, we do not find that HB55 would improve the Sustainability Score for Alaska PERS.

The Alaska PERS funded status has had a troubled history. The state closed its defined benefit plan to new members as of July 1, 2006 and in the years since has not always fully paid the actuarially required contribution. While the state legislature has improved this practice, the primary reason that PERS developed unfunded liabilities has been underperforming investments. As of the most recent actuarial valuation from 2020, the funded status of PERS was 61.6% with $5.9 billion in unfunded liabilities. Nearly $3 billion of that is directly from investment returns being less than assumed.

Some good news is that Alaska PERS, like all other pension funds, had significantly strong investment returns last year. The ARMB is still developing its actuarial valuation report for the fiscal year ending June, 2021. However, a preliminary ARMB assessment estimates the funding shortfall for PERS has declined to $3.67 billion reflecting a 76.46% funded ratio(on a net pension liability basis using a 7.38% rate of return as the discount rate).[13] 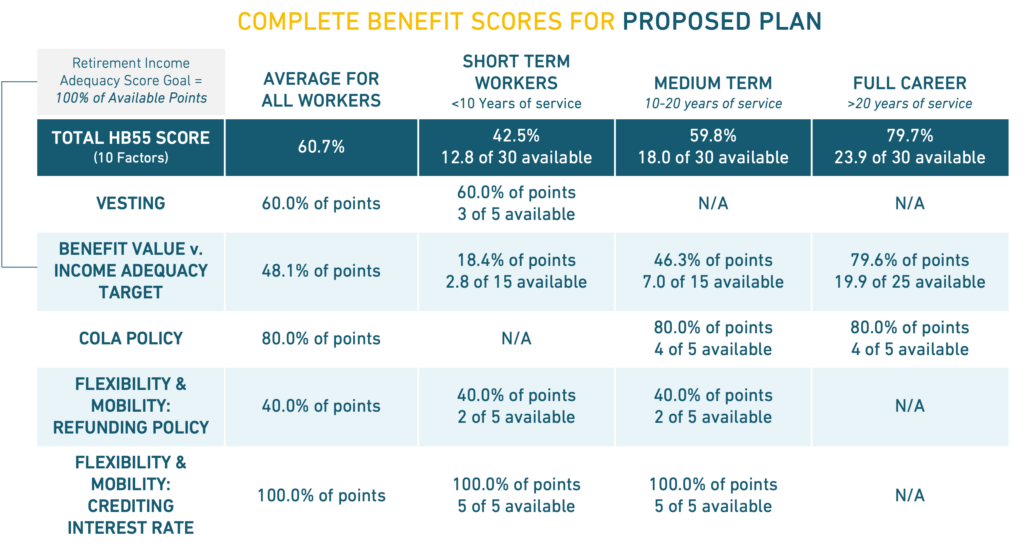 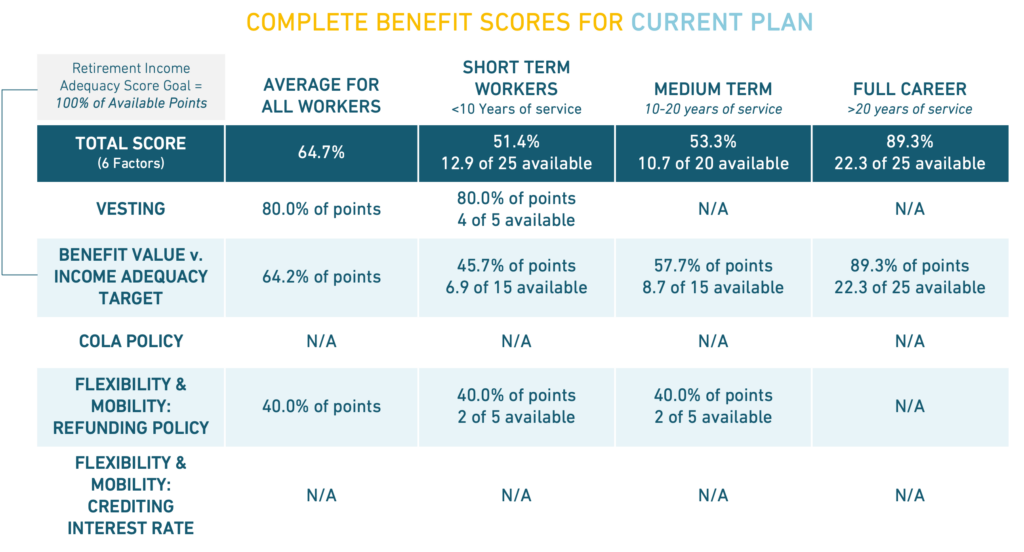 The tables below show the proposed plan’s total Benefit Scores, based on how old a member is when they are hired. We also show how proposed changes compare to the current plan for the same kind of public worker. And we show what the material effect would be on an average employee’s annual retirement earnings, using salary assumptions used by PERS trustees. Underneath each table is a figure that shows a comparative forecast for the value of benefits over time 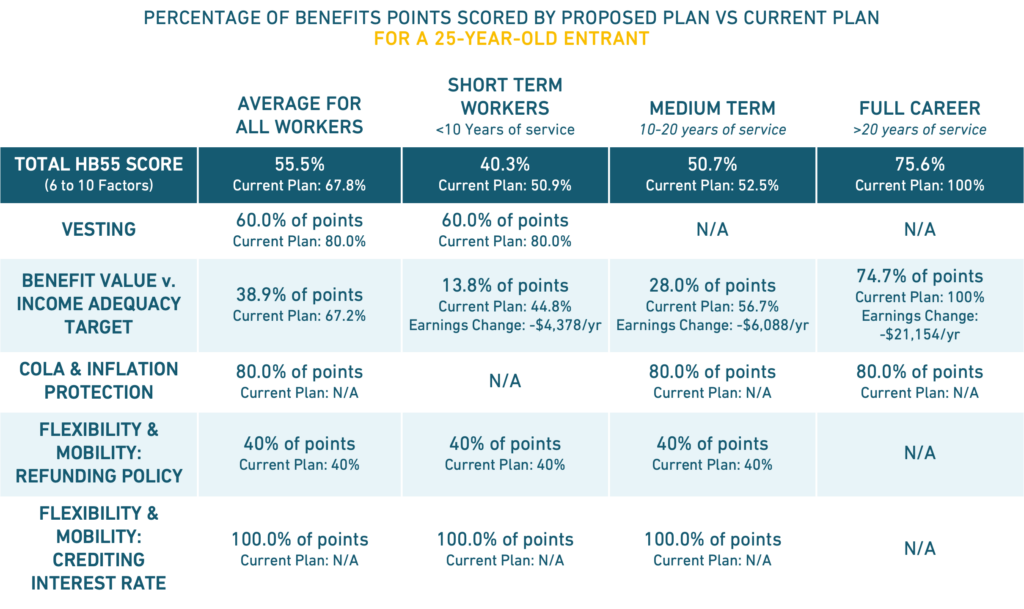 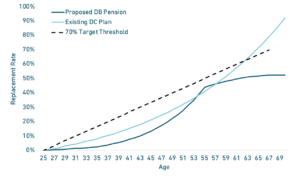 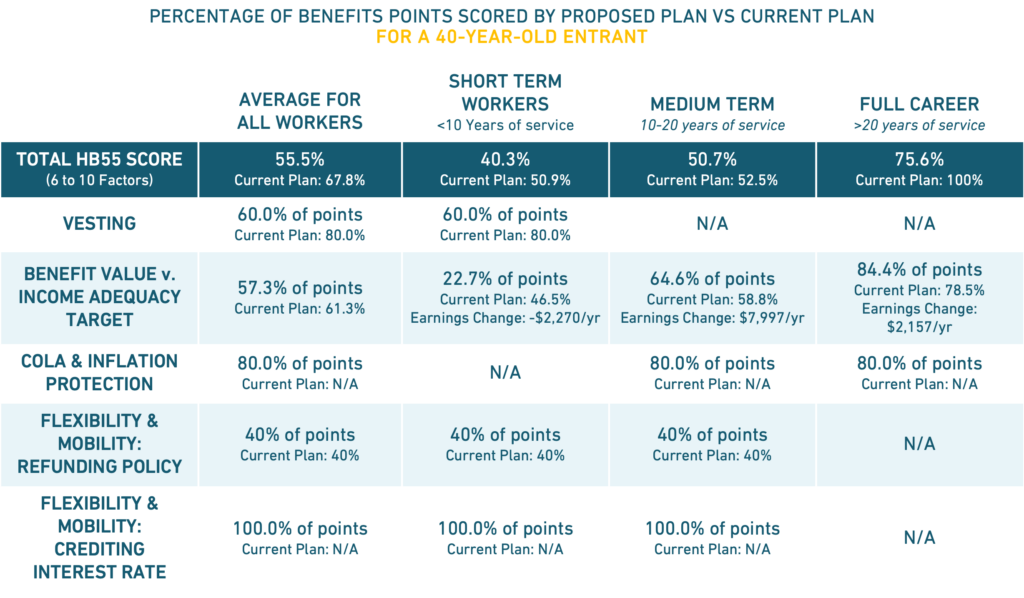 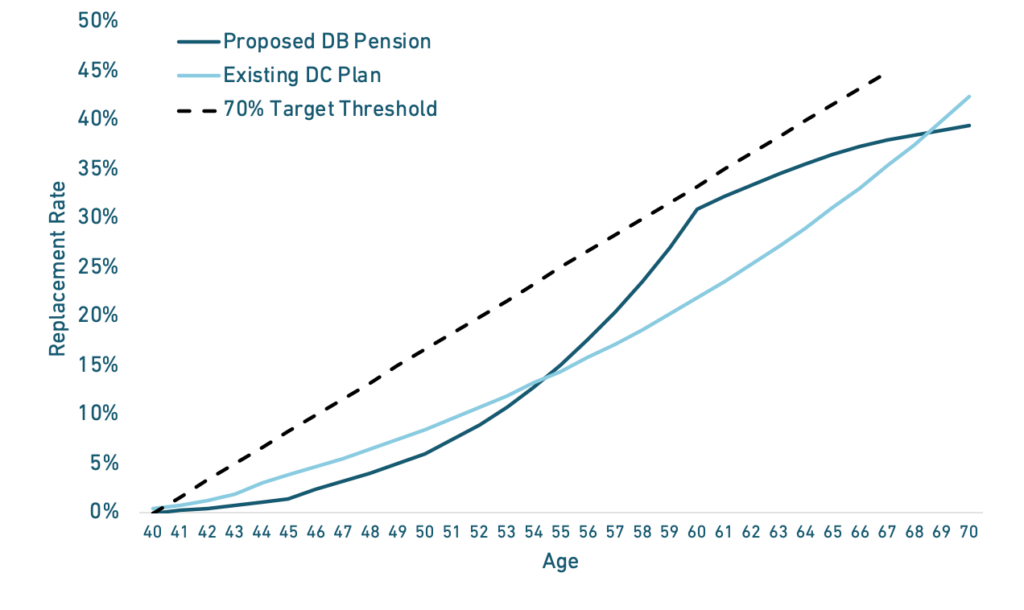 [3] As described in “CS for House Bill No. 55(FIN)” as adopted by the Alaska House of Representatives, and the “FiscalNote” for HB55, including analysis provided by Buck Consulting.

[4] The RSR’s Benefit Scores consider a range of factors including eligibility, income adequacy, inflation protection, mobility, and more. Defined benefit pension plans are scored on 10 factors; defined contribution plans are scored on 6 factors. To ensure appropriate comparison between such plans we report the percentage of available points scored across these factors. For a complete list of factors that are used to measure different kinds of retirement plans visit RetirementSecurity.Report and read the methodology.

[5] The current Alaska PERS Defined Contribution plan does not have a built-in, prefunded cost-of-living adjustment. The proposed defined benefit pension plan for PERS would have a “Postretirement Pension Adjustment,” subject to reduction in the future if the retirement plan’s funding declines below 90% The proposed plan’s 80% of available points for COLAs exceeds the 0% of points score for the defined contribution plan.

[6] Most individuals who become peace officers, firefighters, teachers, or other public workers join because of a personal commitment to the profession, for salary, for health benefits, for secure employment, or because of a family/friend connection. Few individuals make any job choice solely because of retirement plan benefits, no matter the underlying design. There is some evidence to suggest that pension plans can encourage retention of individuals after 15 to 20 years of service, but those effects only have been found with ”very generous” benefit values and low member contribution rates, and some academic analysis has found no meaningful retention effects from retirement plan design. For more see, academic analysis from Stock and Wise 1990; Coile and Gruber 2007; Behagel and Blau 2012; Brown 2013; Clark, Hanson and Mitchell 2016; Ni and Podgursky 2016; Morrill and Westhall 2018; Quinby and Sanzenbacher 2020

[7] The RSR’s Sustainability scores are an abridged assessment of the financial condition of a retirement system based on investment performance relative to assumptions, the historic consistency of state legislatures ensuring actuarially determined contributions are paid, the existence of risk-sharing tools, and whether the amortization period is projecting full funding in a reasonable period. For complete background on why we use these select factors visit RetirementSecurity.Report and read the methodology.

[9] Member contributions to the legacy defined benefit plan (for members hired on/before June 30, 2006) are 7.5% of salary for those who are peace officers or firefighters. Other members of Alaska PERS pay 6.75%. Members of PERS who have elected to have their service calculated using Teachers’ Retirement System of Alaska rules pay 9.67%. Member contributions to the PERS defined contribution plan (for members hired on/after July 1, 2006) are 8% of salary.

[12] Policymakers who are building pension plans to be financially resilient should consider the risk-sharing and risk-mitigation concepts published in frameworks from Equable Institute, Urban Institute, and Rockefeller College.

State and local governments are on the hook to pay retirement benefits to public employees such as teachers and public safety officials. However, governments generally […]