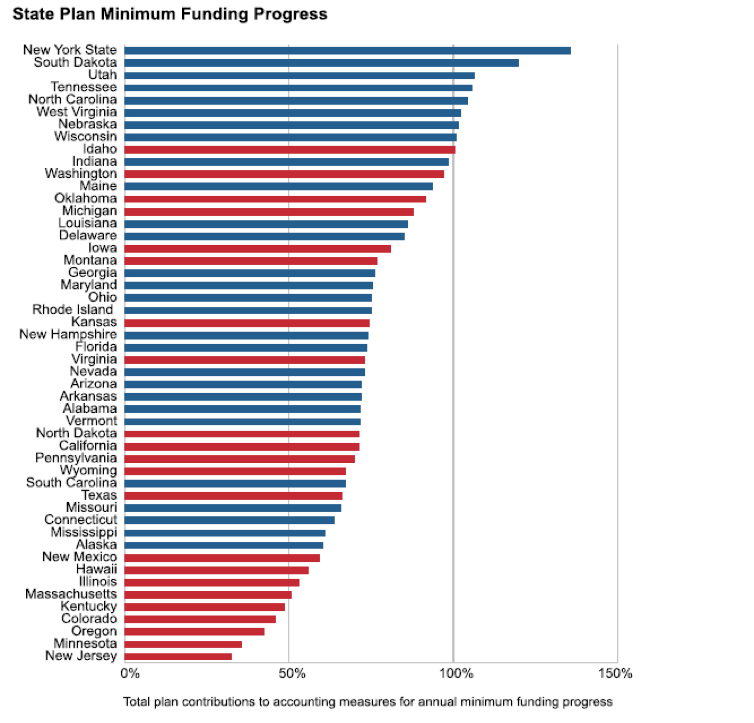 S&P Global Rating’s analyzes state and local pension plans from the perspective municipal bond holders, the organizations that lend money to state and local governments. As part of this process, S&P Global has developed their own metrics of what governments should be contributing to their pension plans, in part based on a more conservative estimate of the value of total pensions promised by each state. And against this benchmark, most states are coming up short in what they should be putting into their pension funds.

“U.S. State Pensions Struggle For Gains Amid Market Shifts And Demographic Headwinds” is an analysis of the funded status of public plans based on internal metrics at S&P Global. While much of the study is behind a paywall, certain portions have been regularly published for public consumption, including S&P Global’s “minimum funding progress” benchmark (shown above).

“In our view, states that consistently fund full required contributions on an actuarial basis and use conservative assumptions and methods are more likely to effectively manage their pension liabilities and the associated long-term budgetary costs than states that do not,” according to Todd Kanaster, Director of Pension Analytics for S&P Global.

For more details on the graphic, you can review this presentation at the National Council on State Legislatures.

The healthiest year on record for U.S. pension funds was 2001, when collectively the major retirement systems across the country reported being virtually 100% funded. […]

The median assumed rate of return for state defined benefit retirement plans in the United States is 7%, as of September 2021. The average is […]

A History of Growing Benefits

At the turn of the millennium, public pensions seemed to be riding high. By their own accounting, most such funds were more than fully funded, […]