How does the Windfall Elimination Provision work?

Calculating the size of the WEP reduction for any specific person requires an understanding of how the government calculates a worker’s monthly Social Security retirement benefit. Generally speaking, Social Security benefits were designed to provide retirement income that replaces some, but not all, of a person’s earnings from their working years.

By design, the Social Security Administration’s formula is progressive: it replaces a higher share of earnings for low-income workers and a lower share of earnings for high-income workers. Social Security applies a formula to a worker’s average monthly “covered earnings.” This formula separates those covered earnings into three groups: a minimum level, a middle level, and a high-end level.[1] (These groups change annually based on growth in the cost of living.) The objective of this formula is to replace a different percentage of the workers average earnings from each of the three groups.

The standard formula for most workers is:

It relatively easy to apply this formula. For a hypothetical worker with average monthly covered earnings of $3,000, the monthly benefit is:[1]

The WEP modifies the Social Security benefit formula for workers who meet the pension and covered earnings criteria. It reduces the initial 90% replacement rate for the first “earnings group,” (i.e., the minimum level of earnings, which in 2022 is up to $1,024). The reduction amount ranges depending on the years an individual has worked, changing the replacement rate factor in that first earnings group to as much as 85% or as little as 40%.

Specifically, the exact replacement rate for the minimum level of earnings under the WEP depends on how many years of “substantial earnings” the worker received from covered employment. The more years the worker has accumulated while in covered employment with wages above that substantial earnings threshold, the less the replacement rate will be reduced.

If a worker has 30 or more years, there is no reduction, and the standard Social Security benefit formula applies. For other workers, there is a sliding scale, shown in Table 1. 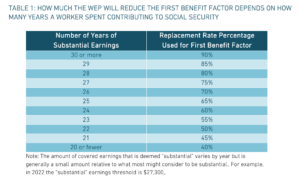 The formula for workers affected by the WEP is:

Again, the specific replacement rate number included in the first earnings group ranges between 40% and 85% and is dependent on how many years a work has earned substantial earnings (see Table 1).

The reason that Congress has taken this approach to adjusting benefits is based on the idea that the more a worker has contributed into Social Security through their tax contributions and the more time they have spent in a job with a participating employer, the less those benefits should be reduced.

Example 1: A teacher earned a pension from a school district that did not participate in Social Security. Thus, she meets the pension criteria. This teacher also worked in the private sector for twelve years, with some years before and after her teaching career. The average monthly “covered earnings” from her private sector work is $2,000. Thus, the teacher qualifies for Social Security and meets the covered earnings criteria. The WEP applies to her Social Security benefits.

Example 2: A worker starts her career teaching at a school district that did not participate in Social Security but leaves the classroom after four years, before vesting in any pension benefit. Thus, she does not meet the first criteria and the WEP will not apply. She spends the rest of her career in the private sector (not necessarily always related to the education field) and the average monthly “covered earnings” from that work is $2,000.

The “worker” in Example 2 has $512 more per month than the “teacher,” even though they had the same average monthly covered earnings.

As a practical matter, a teacher who spends their full career in education and earns a pension with 30 years or more of service, will almost certainly have a larger pension benefit than $512.[1] But the Social Security WEP formula does not take into account the actual amount that a pension benefit provides, so the specifics on whether the WEP’s logic are unreasonable will vary from person to person.

[1] Note: these earnings levels are determined on a pre-tax basis.

U.S. public pension investment losses in 2020 were heavy. The global rout of financial markets this year is putting pressure on state and local government […]

Why the Assumed Rate of Return Matters: Georgia

Everyone has their favorite moment of realizing the effects of inflation. Just five cents for a bottle of Coke? You’d be lucky to get that […]