The nation’s public retirement systems have emerged from a decade of unprecedented changes to benefit design and financing, yet many jurisdictions are still short of what they need to fully fund retirement benefit obligations.

Since 2000, when public retirement systems were almost fully funded, states have seen aggregate unfunded pension liabilities grow to more than $1 trillion, with an additional $700 billion in unfunded retiree health benefit costs. As the gap has widened, retirement system contributions from taxpayers have doubled as a share of state revenue, but they have still fallen short of what is needed to improve the overall funding situation.

While past reforms will lower costs somewhat over the long term, pension funding will continue to be a financial pressure in many states as large numbers of older employees retire and revenue growth is relatively weak. In addition, continuing market volatility, along with the threat of another downturn, could increase pension funding costs and pressure policymakers to consider additional reforms at a time when they also need to continue funding core government services such as schools, public safety, and infrastructure.

With that backdrop, it is important for policymakers to understand the legal protections afforded to workers’ retirement benefits—and lawmakers’ ability to modify the terms and conditions of those benefits. […]

All 50 states protect public pensions to some degree. Pew found that eight states rely exclusively on the state constitution; six states rely solely on statutes enacted by the legislature; and 26 states rely exclusively on court rulings that find pensions to be part of a contract between the employer and the employee—also known as the “common-law contractual approach.” Five states use a combination of judicial decisions and state statutes to protect retirement benefits for public employees, and one state relies solely on judicial decisions. Four states protect pensions in different ways. 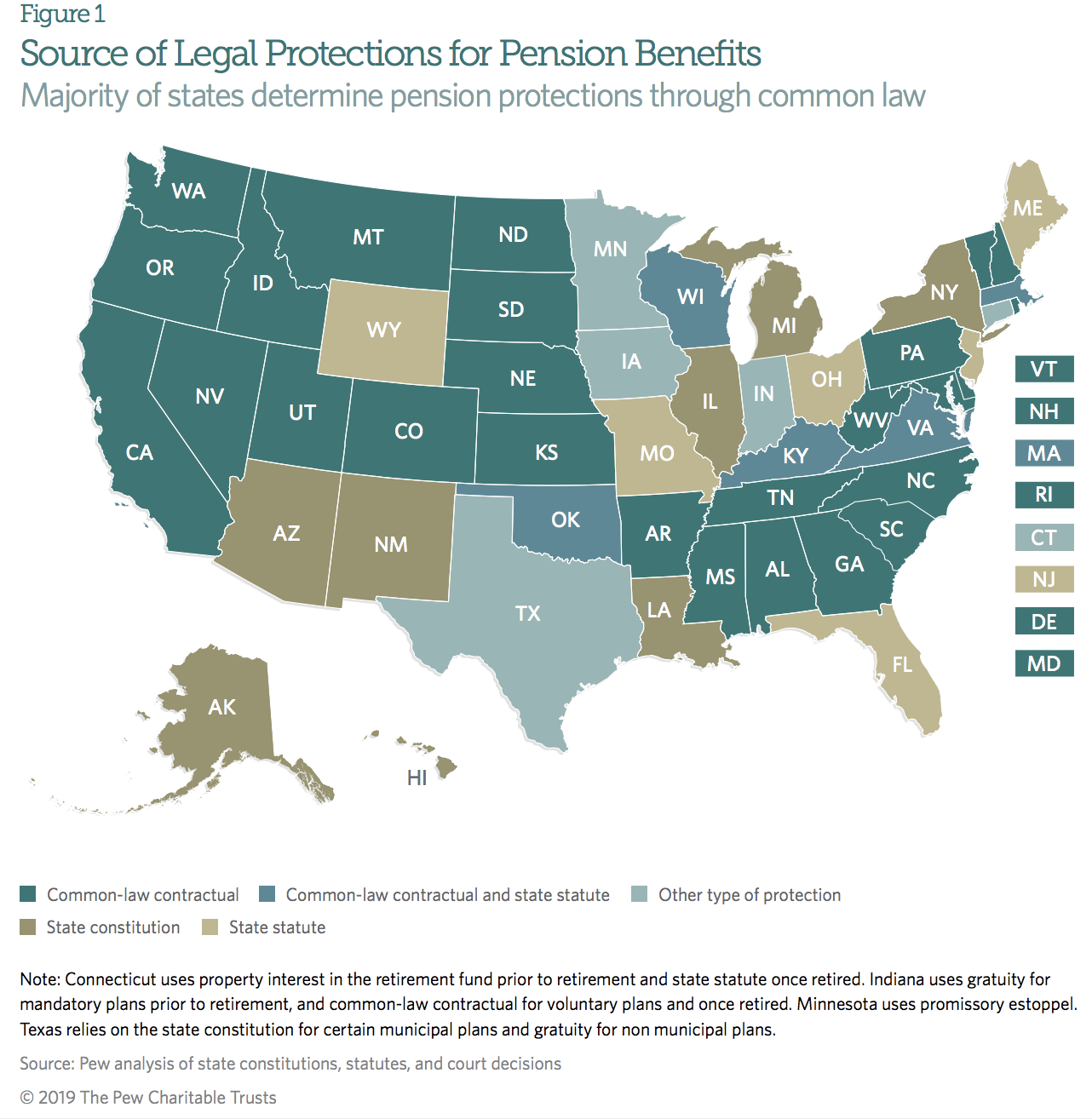 _______________
This article republishes selections from “Legal Protections for State Pension and Retiree Health Benefits” by Amy B. Monahan, a policy brief published by Pew Charitable Trusts in May 2019.

Trustees of the Kansas Public Employees Retirement System on Friday decided to retain the current 7.75% investment return assumption rather than heed a recommendation of […]

The COVID-19 pandemic is clearly a bad thing, but were public pension plans at least getting healthier before this struck? A few state pension funds […]

More than a million teachers across the country do not participate in Social Security. There are 12 states that have totally opted out of Social […]