“While there is some appeal in this approach,” writes Bellwether Education Partners in a recent analysis, “‘charging’ all districts equally ignores important differences across districts and can unintentionally create a greater burden on high-poverty districts.”

The following summarizes some of the key findings from Bellwether’s review of Maryland education spending and pension costs.

Current pension cost budgeting is regressive: Low income districts have a harder time generating revenue for their schools. This means that spending the same as affluent ones can actually consume a greater share of their total school funding. To illustrate this point, consider a $100 parking ticket. Every ticketed person owes the same amount of money to the city, but the financial burden of that citation is far less for a corporate lawyer than it is for a barista. In other words, equal cost can still produce inequitable results.

While spending on pension debt can actually create a greater financial burden for low-income districts, Title I of the Elementary and Secondary Education Act (ESEA) is structured to provide greater funding to districts serving the highest concentration of low-income students. The problem is that in Maryland, spending per pupil on pension debt has far outgrown Title I funding. In other words, pension debt costs in the state are now so large that they overwhelm investments to support the education of the state’s low-income children.

Pension costs are undermining financial equity goals: Not every district receives the same amount of Title I dollars per pupil. This is because the federal government allocates these funds somewhat progressively, with higher poverty districts receiving greater support per pupil than more affluent ones. The idea is to provide greater financial support to students who attend high-poverty schools and typically face more significant challenges. Pension debt, however, undermines that effort. As shown below, pension debt costs are far greater than the amount of Title I per pupil funding a district receives. Even in Maryland’s highest poverty districts, average pension costs are significantly greater than average Title I funding.

As a result, the state’s pension spending blunts the effect of federal education spending designed to provide greater support to high-poverty school districts. If Maryland were to improve the financial health of its teacher pension system, students attending high-poverty districts would receive greater per pupil funding overall, even if the state didn’t increase the equity of its own school funding system. 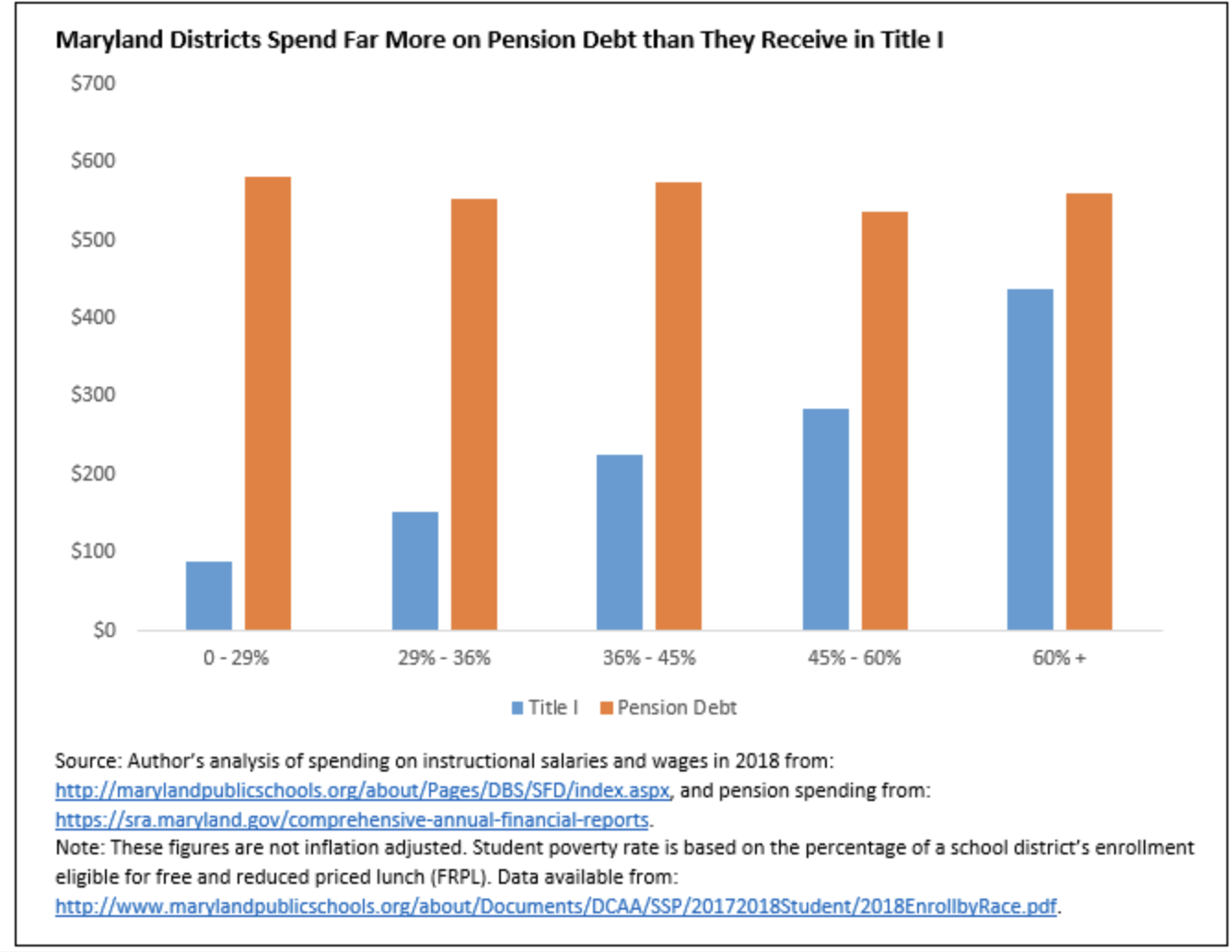 The way Maryland is budgeting for pension spending is increasing the funding inequities that already exist between Baltimore City and Baltimore County: Consider Baltimore City and Baltimore County. The city has an 83 percent student poverty rate, while the county has a poverty rate of 44 percent. The large difference in the concentration of poverty between the districts results in a wide gap in Title I funding. However, as shown in the table below, receiving nearly three times as much Title I funding per pupil still does not overcome the salary and pension spending inequities.

The total salary and benefits gap between Baltimore City and County, excluding Title I, is $471 per pupil. Pension spending increases the salary-based disparity by 23 percent. Layering Title I on top of that funding context, even with Baltimore City receiving so much more per pupil, is not enough to overcome the existing inequity.

Read the rest of this article here. This is a selection from “In Maryland, Teacher Pension Spending Compounds School Finance Inequities,” by Max Marchitello, in October 2019.

How Much Do States Spend on Retirement?

Every day, an estimated 10,000 Americans baby boomers retire – and unfortunately many of them will spend their golden years pinching pennies. According to a […]

Most public workers in America are enrolled in a pension plan. For those who work a full career in education, public safety, or other state […]

What are Unfunded Liabilities for Pension Plans? Pension plans are designed to collect contributions from active workers, invest that money to produce a return, and […]