Statewide retirement benefits look different than they did at the beginning of the century, or even at the start of the previous decade. In this piece, we’ll examine some of the changes made to statewide plans over the past few years and how those changes effect public workers’ retirements. While more options have been created by state legislatures, there’s still a lack of retirement security for all public sector workers—especially as it pertains to cost-of-living adjustments.

In 2001, there were 225 total retirement plans and benefit tiers open to new hires nationwide—this included traditional Pension plans (which make up the bulk of all available plans), Defined Contribution plans (as a primary source of retirement income), Guaranteed Return plans (sometimes called “cash balance”), and Hybrid plans (combinations of the other designs). That number now stands at 337. The increase in total plans and tiers is due, in part, to states designing options and plans for narrower segments of the workforce. 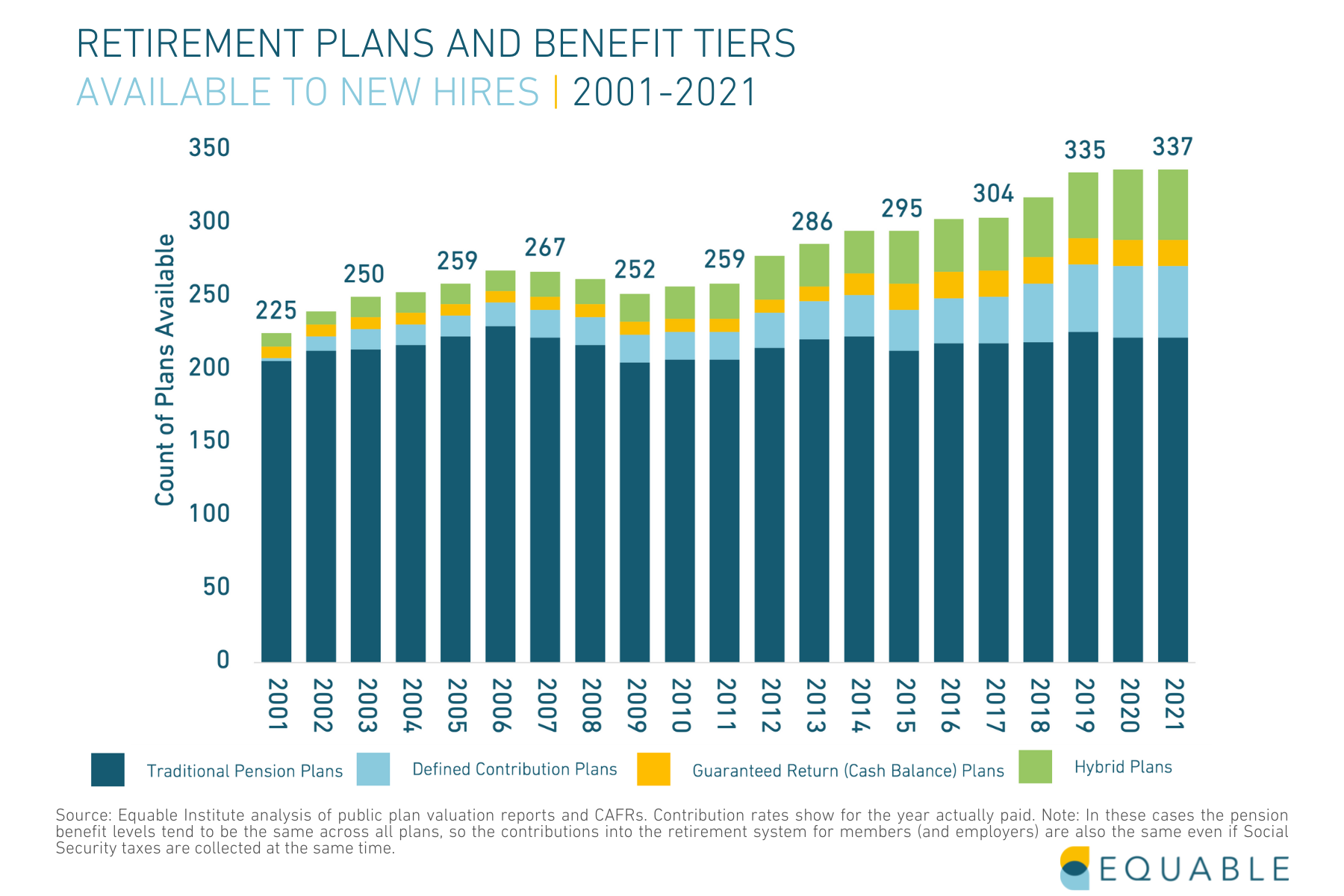 This expansion of benefit designs generally has focused on adding “Hybrid” plans that combine guarantees with individual accounts, while stand alone Defined Contribution and Guaranteed Return Plans have also increased in availability over the past decade.

Two notable tier additions occurred in the last year in Kentucky and Texas. In The Bluegrass State, the Legislature created a new tier within the Teachers’ Retirement System that enrolls teachers hired on or after January 1, 2022 into a Hybrid (Pension/Guaranteed Return) plan. Current hires will remain enrolled in the state’s traditional pension plan.

The new benefit tier mandates a higher member contribution rate—teachers under this tier will contribute 9% of salary to their pension plan, plus 2% to their guaranteed return plan notional account. Employers pay a fixed, statutory rate of 10.75% of payroll, of which 2% is for contributions to guaranteed return plan accounts. Workers will also have to work 30 years, instead of 27, to claim the maximum retirement benefit.

Additionally, a risk-sharing element of the new tier requires members to make increased contributions to the pension plan if its funded ratio falls below 90%. That means mistakes made by the system, or the legislature overseeing it, could result in smaller paychecks for public workers.

And in Texas, members of the Employees’ Retirement System will be enrolled in a Guaranteed Return Plan as opposed to the traditional defined benefit plan current members have. The system will manage investments and guarantee returns equal 4% annually. Any returns earned above 4% will be split evenly between members and employer accounts, up to a maximum 7% return for members.

How this Affects Public Workers

The creation of new benefit tiers is a common move by legislatures looking to rein in their unfunded liabilities—this was part of the reasoning in Kentucky and Texas. (In Kentucky, the legislature also wanted to cap future liabilities; in Texas, the legislature wanted a retirement plan that would make it easier to recruit workers to state government for a 10-year or less period of time.) Often, these new tiers or plans have higher member contributions and lower cost-of-living adjustments.

This affects the public workers in many ways. Barring an increase in their base pay, future hires can expect smaller paychecks than current public workers because more of their salary will be going to reducing the state’s pension debt. And with lower, or eliminated, cost-of-living adjustments, the retirement benefits those workers do earn are likely to be eroded by inflation.

Inflation protection of benefits is important for ensuring they continue to provide retirement income security as intended.

Pension plans (including hybrids where a portion is a pension benefit) currently provide a range of cost-of-living adjustments, depending on the local rules.

And while most states have linked COLAs to inflation, roughly 1/3 of pension plans do not have automatic COLAs. 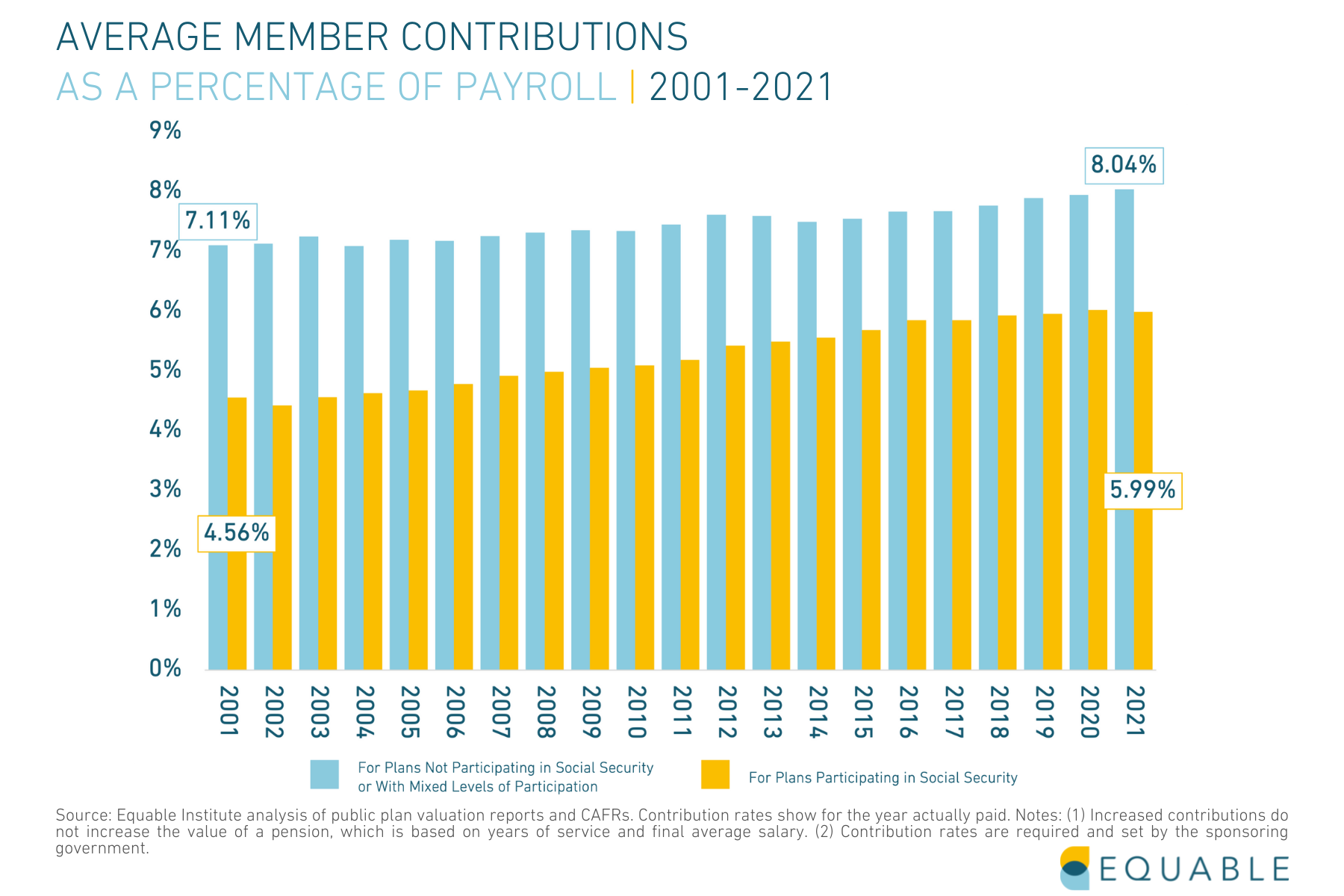 Click Here to read the full State of Pensions 2021 report

If you are interested in diving deeper in to benefit trends and adequacy, check out Equable’s Retirement Security Report

Texas teachers’, public safety officers’, and public workers’ pension benefits are entitled to certain protections under state law and affirmed by court rulings. At the […]

There are many theories about why America has over a trillion dollars in public pension debt. And there is certainly more than one reason why, […]