Teacher retirement systems in 2022 are Fragile.

There are 63 retirement systems offering benefits to teachers, K–12 school educators, and other public school employees. These systems offer over 300 tiers of defined benefits that promise lifetime retirement income. Collectively, these are often simply called “teacher pensions,” even if they include other K–12 staff.

Some of these teacher retirement systems serve their members well, with adequate funding and quality benefits. However, many face a wide range of challenges, such as growing and unpredictable pension costs.

In this article, we summarize some of the multi-decade financial trends that affect teacher pensions in America today. 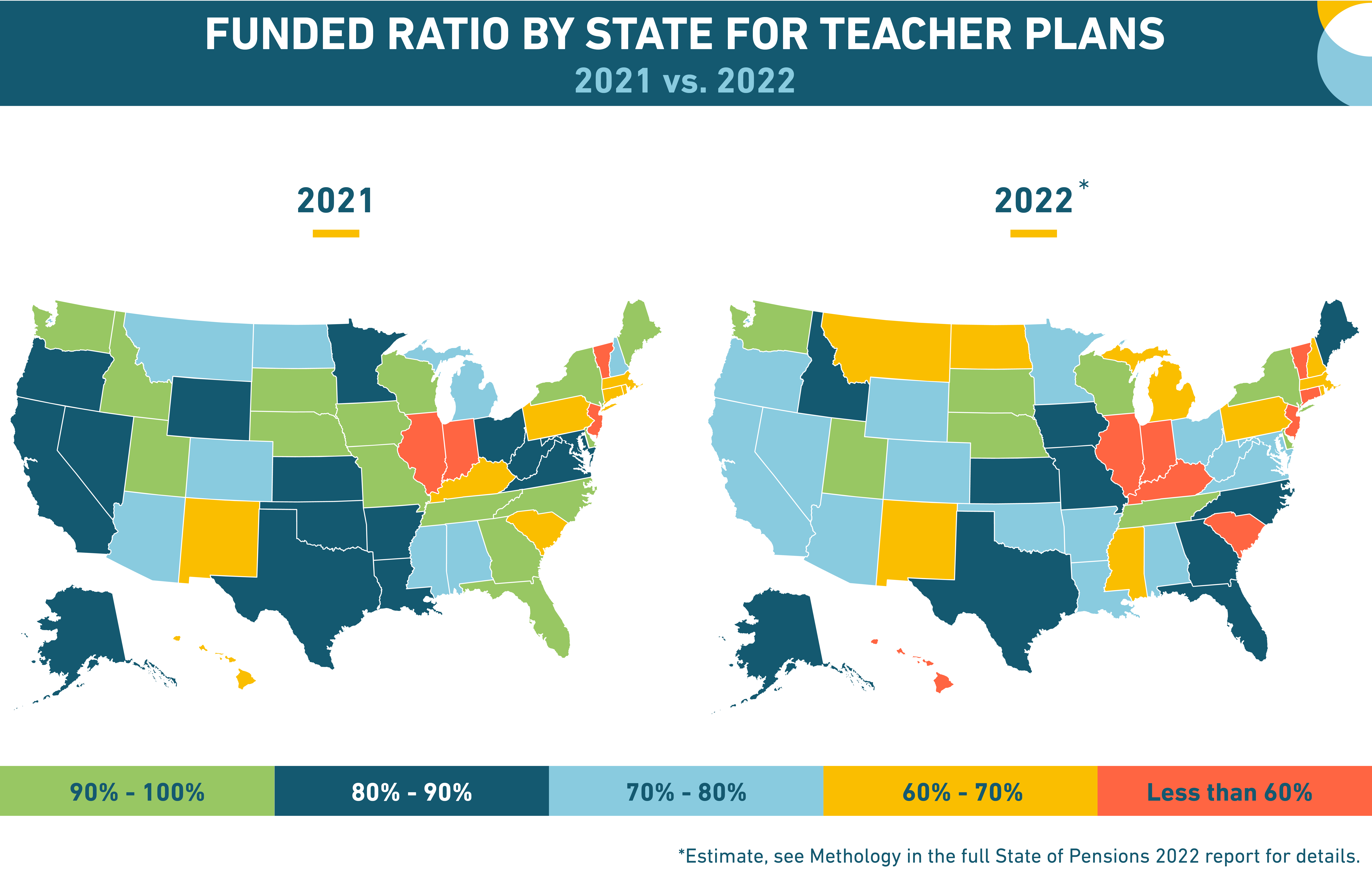 Financial markets in 2022 have suffered significant losses. As a result, teacher pension funding in the United States has also taken a financial hit.

Last year, massive investment returns helped improve the funded ratios for teacher pension plans while reducing their unfunded liabilities. This year, however, those trends have reversed. This can be seen in the figure above that shows the change in funded ratios for each state from 2021 to 2022.

Looking back in time a bit further, historic trends for teacher pension funding reveal that they are recovering very slowly from losses that happened before and after the financial crisis of 2008-09.

The chart below shows a two decade history of the funded ratio for teacher retirement plans in the U.S. A similar pattern is also seen when looking at the unfunded liabilities of teacher pension plans.

The chart below shows historic trend lines for promised benefits (known as “liabilities”), assets held by teacher pension plans (called “assets” on the chart), and the relative shortfall between the two. That shortfall is the shaded area on the chart. The shortfall, or funding gap, are unfunded teacher pension liabilities (sometimes referred to as “pension debt”).

As of 2022, Equable Institute estimates that the teacher pension funding gap is $878 billion.

The chart below breaks down how the assets of teacher pension plans have been invested over the past two decades. A rapidly growing share of teacher retirement system assets are being invested in high-risk investments, like private equity and hedge funds, and real estate.

The trustees who manage teacher retirement systems often are responsible for setting an “assumed rate of return” on investments.

The assumed rate of return is educated guess made by actuaries about how much they think they can earn by investing pension contributions. This is the most important assumption that pension boards determine to ensure benefits are fully funded.

As of 2022, the average assumed rate of return for teacher pension plans is 6.9%

Most teacher pension plans require both members and government employers make contributions to fund benefits. But, the size of contributions has increased over time because of the persistent challenge of unfunded liabilities.

As of 2022, the average employer contribution for teacher pensions is 20.1% of payroll presently. Within that, 14.9% goes to pension debt costs, where as 5.2% funds current benefits.

The figures shown are as a percentage of salary paid.

The majority of teachers in the U.S. are enrolled in defined benefit pension plans. However, there are increasingly numerous other retirement plan designs available to teachers across the country. In the table below, we show various retirement plan types that K–12 public schools offer and the numbers of tiers, or classes of benefits, available to different employee types.

Teacher Retirement Benefit Values Over the Past Few Decades

During periods when legislatures felt financially strong, benefit improvements were made. In moments of fiscal stress, lawmakers and boards of trustees often modified or reduced benefits (within the legal parameters of the state). The result is that the value of teacher retirement benefits has varied over time considerably. Unfortunately, the value of teacher pension benefits has declined significantly since 2005, which is shown in the figure below.

We estimate that a teacher hired in the 2023 school year will earn approximately $100,000 less in retirement benefits compared to an educator hired in 2005.

A key feature of teacher pension plans is that they offer guaranteed income for life. But unless the purchasing power of that income keeps up with inflation, guaranteed income doesn’t necessary provide financial security. That is why many public pensions come with cost-of-living adjustments, or COLAs.

The average COLA provided by teacher pension plans this year is 1.8%. Comparatively, this is about the same as the average cost-of-living adjustment offered to all public pension plan retirees.

The map below shows the states offer automatic COLAs to retired teachers in green. The states don't have COLA provisions are in red. Those that only pay COLAs on an ad hoc basis are in dark blue.

In some statewide retirement systems offer different primary benefit plan options. This gives new teachers a choice about what retirement plan they enroll in.

The table below lists which systems offer choices to public K–12 teachers and public school employees and what those choices are:

Most teacher pensions are provided by a state administered retirement system. In a few states, some cities have their own retirement plans for teachers. This includes Chicago, Denver, Kansas City (MO), New York City, St. Louis (MO), and St. Paul (MN).

Even though there are separate retirement systems for teachers within the same state, legislators have designed the benefits offered to be similar for new educators who start working at city public schools. For example, in New York the “Tier VI” pension plan is available to new teachers in the New York City public school system, as well as those in upstate New York and Long Island, even though NYC manages an independent pension system for its teachers and public workers.

The primary reason that a few cities offer separate pension plans is historical. Some cities were the first to set up teacher pension plans and they didn’t always include benefits for educators outside of particular geographic areas.

Colorado is unique in that the retirement plan for Denver Public Schools employees merged with the statewide system about a decade ago. Colorado’s Public Employees’ Retirement Administration now manages the assets for their “DPS Division” alongside assets for all other public school teachers in their “Schools Division.” Over the past several years, there is an ongoing discussion in Minnesota about the independent St. Paul pension plan doing the same thing.

More than a million teachers across the country are not able to enroll in Social Security and teacher pensions. There are 12 states that have […]