California state and local government agencies offer a range of different defined benefit pension plans. Some public employees are enrolled in California pensions offered through a statewide retirement system, such as CalPERS or CalSTRS. Other California public pensions are managed directly by cities and counties, such as those offered in Los Angeles, San Diego, San Francisco, and San Jose.

Collectively, these pension plans have reported $173.6 billion in unfunded liabilities as of June 30, 2021. However, we estimate the those unfunded liabilities will increase to $268.6 billion total once 2022 financial reports are finalized. This would reflect a decline in the average funded ratio of California pensions from 86.8% in 2021 to 80.4% in 2022.

In this article, we breakdown the financial status of California’s largest public pension plans and provide information about the benefits those retirement plans offer. 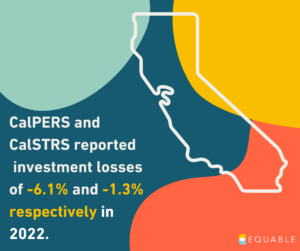 Overall, while some of California’s pension plans are resilient, most are fragile.

The following table shows the funded ratio and unfunded liability amount for California’s largest retirement systems, based on what each pension plan has reported for 2021 and what we estimate for 2022.

Table Note: Figures in the table above are primarily based on GASB 67 accounting rules. Since CalPERS does not provide GASB 67 data for its “PERF A” plan, we have used funded status data based on market values and actuarially accrued liabilities.

In 2021, massive investment returns helped improve the funded ratio for most California pension plans, and reduced their unfunded liabilities. This year, those trends have reversed.

Looking back in time a bit further, historic trends for California pension funds reveal that they are recovering very slowly from funding declines that happened before and after the financial crisis of 2008-09.

The chart below shows a two decade history of the funded ratio for the larges California pensions combined.

Depending on the tenure of a public employee, retirement plans can work in very different ways. Equable scored each California pension plan across multiple dimensions for public workers at different stages in their career. The Retirement Benefits Scores listed below measure how well specific retirement plans serve workers depending on their years of service. (For complete methodology, see Equable’s “Retirement Security Report” interactive website.)

The scores above are a comprehensive assessment of the quality of retirement benefits offered to California's public sector workers. The plans included are offered through CalPERS, CalSTRS, URS, and other county and city retirement systems. Each pension plan is broken down into various “tiers” or classes of benefits, based on profession and hire date. The underlying benefit provisions that vary typically are related to the “benefit multiplier,” rules defining normal retirement eligibility, cost-of-living adjustment provisions, member contribution rates, and cost-sharing policies. (Read this article for more about defined benefit plans.)

The 15 largest California pension funds are managing around $1.1 trillion in assets, estimated as of June 30, 2022.[1] These dollars are invested in a wide range of ways. This includes stocks and bonds, but also in real estate, private equity funds, natural resources, foreign currency, and hedge funds.

Based on the investment strategies that California’s pension plans decide to adopt, trustees managing the retirement systems set an “assumed rate of return” on investments.

The assumed rate of return is educated guess made by actuaries about how much they think they can earn by investing pension contributions. This is the most important assumption that pension boards determine to ensure benefits are fully funded.

Historically, most California pensions assumed they could get 8% investment returns on average, until the financial crisis of 2008-09. Since then, the average assumed rate of return for California pension plans declined to 7% in 2022.

The chart below shows the highest and lowest investment assumptions among statewide retirement systems in the past two decades.  The average assumed rate of return is the yellow line across the whole chart.

Table Note: “Employer contributions” typically are paid for by the city, county, or other public agency that is employing a public worker. CalSTRS “employer” contributions are partially paid for by school districts and partially through a state-level contribution to offset costs.

In the first half of 2022, U.S. public pension funds have weathered a bear market, geopolitical conflict, and record inflation. Despite these difficult economic headwinds, […]

California teachers’, public safety officers’, and public workers’ pension benefits are entitled to certain protections under state law and affirmed by court rulings. At the […]