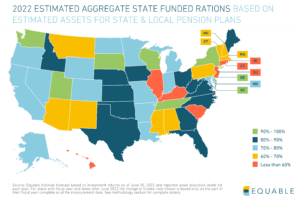 Based on funded ratio, Wisconsin, Washington, and South Dakota have the best funded public pension plans in America. The worst funded plans are in Illinois, Kentucky, and New Jersey.

However, some states carry a larger share of pension unfunded liabilities (or pension debt) than others. California, Illinois, New Jersey, Texas, and Pennsylvania have the highest levels of unfunded liabilities in the United States by dollar value, as of September 2022. Washington State, New York, Tennessee, Wisconsin, D.C., and Delaware, carry zero unfunded liabilities. These states are actually overfunded.

The Best and Worst Funded Pension Plans in the U.S.

Public pension plans in the U.S. are available to a wide range of workers, including teachers, state and city employees, public safety officers, public utility staff, wildlife conservation officers, and more. There is at least $6.3 trillion in future retirement benefits promised to the public employees who are members of the largest 228 public retirement systems. But nationally, just $4.9 trillion has been put aside to pay those benefits.

This means there is a national public pension funding shortfall of around $1.4 trillion, as of June 30, 2022 (formally this shortfall is called unfunded liabilities. Collectively that is just 77.9% of the money that should be in state and local pension funds today (and this percentage is called the funded ratio.

What do Unfunded Liabilties Mean for State Pension Plans?

It is important to understand that within certain states there can be a wide range of funded ratios for different pension plans. For example, in California while the state’s average funded ratio is 79%, some plans are around 100% funded (Contra Costa County Employees' Retirement Association) while others have run out of money and are fully dependent on the state legislature bailing them out each year (Judges' Retirement System).

A helpful way to understand how much of a problem state pension unfunded liabilities are is to compare them to each state’s economy. And a common measurement of state economic activity is state GDP, or gross domestic product.

Note: The data in this article comes from Equable Institute’s “State of Pensions 2022.” The list of states is based on Equable estimates of public pension plan finances through June 30, 2022. The chart of state funded ratios and GDP is based on fiscal year 2021 data because there is not yet sufficient state economic data for 2022. See the full report for methodological details. The 228 state and local pension plans in this analysis account for over 90% of all public pension plan assets in the United States.

Public pension contribution rates have increased considerably over the last few decades. Some governments have had sharper increases than others. In many places mandatory pension […]