Pensions can offer teachers a path toward a secure retirement. However, the costs of “pension debt” have started to cut into the ability of states to provide teacher raises and improve educational equity. Most teacher pension systems have less money set aside than needed to pay for promised benefits (e.g. pension debt). But the tens of billions in teacher pension debt are often difficult to fathom. This study seeks to translate the cost of teacher pension debt into terms that are easier to understand, by showing how much more states could spend on students and teacher salaries if they did not have any pension debt. The results indicate that if teacher pension systems weren’t owed so much money, more dollars could reach classrooms, and states could afford to provide teachers with substantial raises. In other words, teacher pensions aren’t the driver of the “crowd out” phenomenon in education spending – pension debt is. If states can resolve their pension debt, they can get back to funding their educational priorities and can continue providing teachers with a secure retirement.

Bring up the issue of teacher pension debt and most educators quickly lose interest. That’s a mistake, as pension debt will have a devastating impact on the spending available for students and teachers. Maybe the problem seems too far off into the future, or too muddled in technical pension-speak, or perhaps it’s just that citing dollar figures in the billions doesn’t mean much to those of us who’ve never seen that much money.[1] There is certainly no shortage of reports describing debt as “soaring,”[2] “skyrocketing,”[3] or “ballooning”[4] from unfunded teacher pensions. Experts title their reports with warnings that pension debt “hurts school districts”[5] and is “harming teachers and students.”[6] But these alarms have triggered a surprisingly muted response in many education quarters among rank-and-file teachers and education leaders alike. And almost never do we hear of parents engaging on the topic.

It isn’t just teachers and parents that seem disinterested. In a recent finance presentation to state education chiefs, I vividly recall the moment I shifted to the subject of pension debt. That was the moment I saw several chiefs tune out and reach for their cell phones to scroll through email.

The lack of urgency has been vexing to many who have worked to quantify the problem. Gather a handful of pension researchers and inevitably the conversation turns to an exploration of why so few education leaders are engaged in addressing the challenges of teacher pension debt when so much is at stake for schools.

Though many clearly do not find the pension debt topic riveting, it is far from esoteric, especially in a year when teachers are rightly asking for salary increases and leaders are calling for new investments in early learning and other schooling services. That’s because where states are attempting to pay down pension debt accumulated over years, it comes at the expense of other investments, like teacher salaries or funding for students. Just like an unpaid credit card balance that grows over time, the longer states delay paying off the debt, the bigger the debt price tag becomes, consuming an ever-greater share of the finite pool of public dollars available for teachers and students.

Just how much money is at stake? This brief quantifies in immediately relatable terms—by student and by teacher—the magnitude of the crowd-out that pension debt creates for six states. In translating debt payments into the equivalent spend per pupil, and the equivalent spend per teacher, the goal is to help education leaders grasp the relationship between their pension debt bills and their aspirations for spending on schooling inputs, including teacher salaries. Money spent on one thing can’t be spent on another. 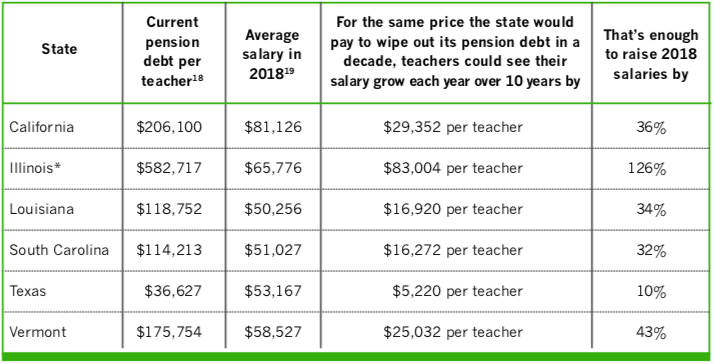 _______________
This article republishes selections from “Leaders Ignored Teacher Pension Debt. Now There’s Less Money For Teacher Salaries And Students,” a policy brief from the Edunomics Lab at Georgetown University in November 2019. The whole policy brief is available here. Equable Institute provided funding for the development of this research.

In 2016, Arizona Governor Doug Ducey signed comprehensive pension reform legislation for public safety officers into law. This pension reform is notable not only for […]

Public pension plans underperformed in 2019 on their projected returns this year, adding to the burden on governments struggling to fund promised benefits to retired […]