Who Is Most Likely to Have Their Social Security Benefits Reduced by the Windfall Elimination Provision?

The largest group affected by the Windfall Elimination Provision, or WEP, is state and local government employees who earn pensions from agencies that do not participate in Social Security (meeting the “pension” criteria), but that separately worked for more than 10 years at jobs with employers who did participate (meeting the “covered earnings” criteria).

There are a few million public employees who might be affected by the WEP. This group of individuals includes a range of public sector jobs, from teachers, to librarians, to police officers and firefighters. They are concentrated in just a few states, though, because most state and local governments do participate in Social Security. See some examples of Social Security Coverage maps below. 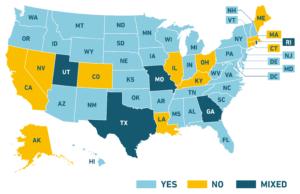 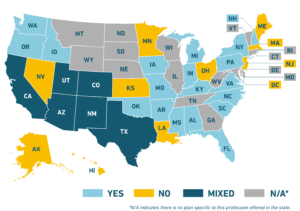 A subset of individuals who are likely most negatively affected are those who just barely vest in their government employer-sponsored pension plan and have the minimum number of covered earnings credits to qualify for Social Security.

For example, imagine a person who (a) worked a small number of years prior to joining public service at a young age, then (b) worked a decade or less in public service (perhaps as a teacher) and qualify for a small pension, but then (c) left the workforce to take care of a family (perhaps to raise children or care for a relative). Such an individual might work just long enough over their lives to meet the covered earnings criteria, but the meager Social Security benefits they’d accrue would then be sharply reduced by the Windfall Elimination Provision because of the small pension benefit they’d have earned.

Rules for Beneficiaries and Survivors

The Windfall Elimination Provision applies to workers described above and the benefits for their eligible dependents. However, the WEP does not affect:

This means that while the WEP might affect a worker’s Social Security by reducing their benefits during their lifetime, should that person die and pass on federal survivor benefits then those survivor benefits would be calculated as if the Windfall Elimination Provision didn’t exist.[1]  However, a separate rule, called the Government Pension Offset may apply to survivor benefits instead. (See the next section.)

Exceptions to the Windfall Elimination Provision

The WEP does not apply to most workers, and there are several exceptions that allow individuals to avoid having their Social Security benefits reduced.

It is important that public sector pension funds receive adequate contributions each year in order to maintain a healthy funded status, or make progress on […]

What are Unfunded Liabilities for Pension Plans? Pension plans are designed to collect contributions from active workers, invest that money to produce a return, and […]

The Texas Teachers’ Retirement System provides benefits to more than 1.6 million members, according to its website. Here’s what you need to know about the […]